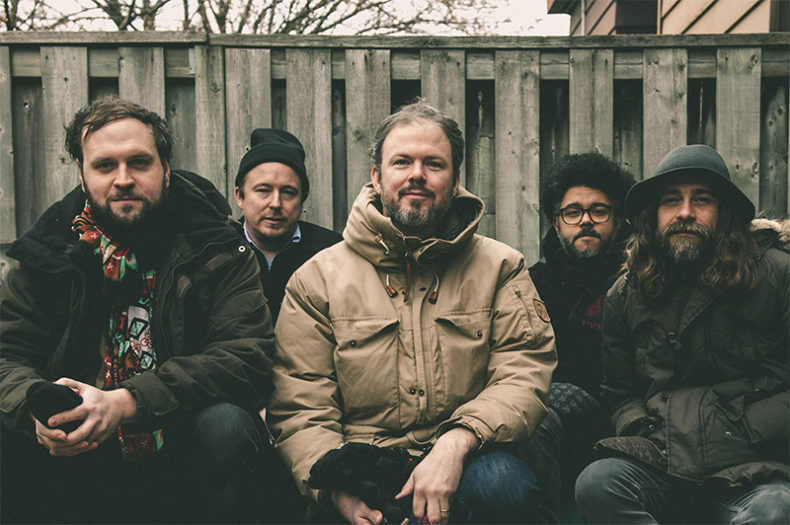 Wintersleep are sharing another track off their upcoming LP, In The Land Of, due out March 29. “Into The Shape Of Your Heart” revolves around the idea of diving into love fully and celebrating it. “Lyrically, it’s a loose narrative of someone showing up to the house of someone he loves and trying to win her heart for the first time or to get it back,” says vocalist Paul Murphy. “I guess there’s room for interpretation but it’s maybe also just trying to capture a snapshot of a moment of two people trying to have a conversation that ends in a dance.”

Due out via Dine Alone Records, In the Land Of has already been marked as one of the most anticipated records of 2019 by Exclaim! and CBC Music. The album studies geography, both real and imagined. It is understood that our surroundings are not, in fact, essential or concrete elements; they’re constructed in relation to us, the inhabitants. Our identities, too, are constructed in relation to the land. The land, both physical and figurative, changes, and so do we. Familiar land. Foreign land. Inhospitable land. Unceded land. Stolen land. Dead land.

Like all Wintersleep records, In the Land Of encourages thought and introspection. The new record’s title is an incomplete thought, a blank that is filled in across the record with different places, words, and sounds. “A lot of the songs touch on this idea of being a stranger or feeling foreign in all the different landscapes in which the songs took place lyrically,” explains Murphy. “It all relates back to the land,” adds guitarist Tim D’Eon.

In the Land Of is available for pre-order now at all leading online music retailers. In addition, bundles are now on sale at the official Wintersleep online store, including tote bags, limited edition clear and splatter vinyl, t-shirts, and much more.

The LP follows 2016’s The Great Detachment, which saw CanCon Rock Single Of The Year “Amerika” spend 11 consecutive weeks atop Canada’s rock radio charts, remaining in the Top 10 for over 7 months as well as winning an Indie Award for Single Of The Year and a JUNO Award nomination for Adult Alternative Album.

On March 20, 2019, Wintersleep will take to the road with tour dates throughout Canada. Full tour dates can be found below with tickets on sale now. The band has also announced their upcoming performances at SXSW at the Dine Alone Showcase on March 13 and at the Driskill Hotel on March 16. The JUNO Award winners have previously toured several continents and shared stages with Pearl Jam, Broken Social Scene and the Hold Steady, a performance on Late Night with David Letterman and even an opening slot for Sir Paul McCartney.

by Robert Defina on April 8, 2022
Lucius Second Nature Dine Alone Records On their sophomore effort, Good Grief, Brooklyn four-piece Lucius perfectly reinvented their act. From the ashes of their indie-folk debut rose an [...]