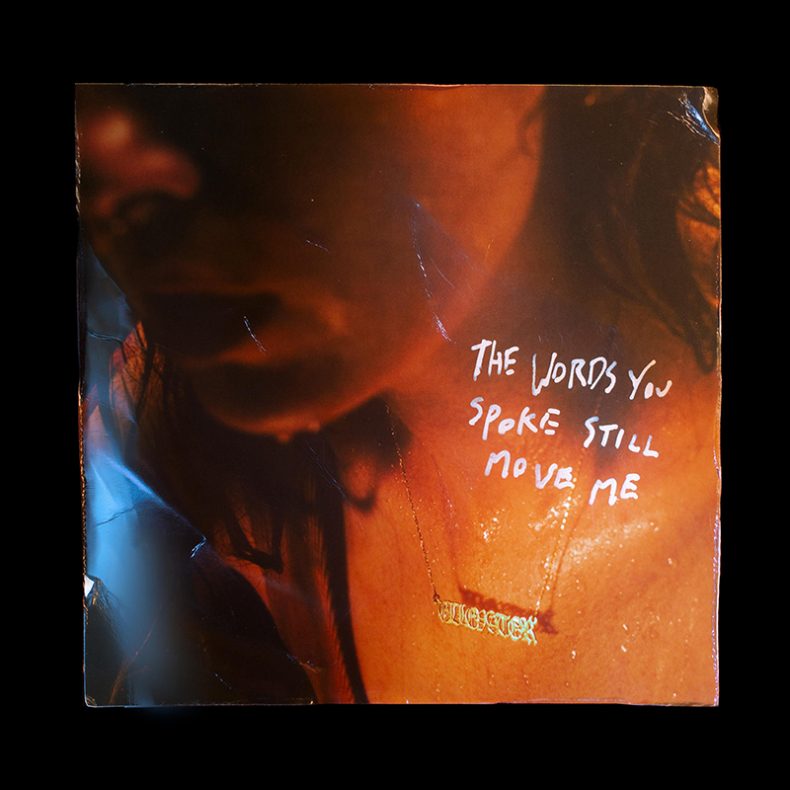 The Hamilton, Ontario-based trio, Ellevator have shared their new single, “Slip” which arrives with another stunning visual piece directed by Cam Veitch and featuring Hawksley Workman. Alongside the new single, the band is announcing details of their debut album, The Words You Spoke Still Move Me  – out May 6 via Arts & Crafts – which comes produced by Chris Walla (formerly of Death Cab For Cutie), who has previously helmed production duties for the likes of Foxing and Tegan & Sara. The new single arrives following earlier tips from NPR, The Needle Drop, Exclaim, FLOOD, The Line of Best Fit, Under the Radar, CBC and more for “Easy” and “Charlie IO.” The band will support the release of the new record with North American dates, including a stop at SXSW in March – full run of dates below (US shows on sale now, Canadian next week).

The band, which is comprised of Nabi Sue Bersche, guitarist, Tyler Bersche and bassist/synth player, Elliott Gwynne, will deliver on the promise of their self-titled 2018 EP with their long-awaited debut album. The record was pieced together across numerous locations but primarily while living together at The Bathouse (a Kingston-area facility owned by Canadian alt-rock legends The Tragically Hip) and comes off the back of earlier dates with Amber Run, BANNERS, Cold War Kids, Arkells and Dear Rouge. Across 12 tracks, it inhabits an emotional landscape that is both breathtakingly intimate and impossibly vast, documenting various experiences to turn universal (existential longing, romantic power struggles, the neverending work of true self-discovery) and highly specific (e.g., one band member’s journey in extracting herself from a cult) storytelling into a truly hypnotic body of work, giving rise to the kind of radiant open-heartedness that radically transforms our own perspective.

Ellevator poses a fantastic ability to sculpt these mammoth, melodramatic post-rock and indie-rock soundscapes, somewhat inspired by the late-aughts sounds of Spoon, Metric, Interpol and Arcade Fire, as well as the stadium-ready sounds of U2, Kate Bush and Peter Gabriel. “Slip” acts as another wonderful installment of this dynamic with the trio turning the dial on the prog-rock influences incorporating chugging guitars with tightly-bound vocals. With the new single, the band turn to explore the folklore surrounding the Selkie, a theme mirrored in Veitch’s accompanying visual.

Speaking about the new single, singer Nabi Sue says: “We went full prog-rock on this one and tapped into some mythological nerdery. A Selkie (seal/woman from Scottish mythology) is captured by a charismatic religious leader and held against her will on land. There are many myths in which a Selkie has her skin stolen and hidden by a man after removing it to spend time on land as a woman. Without their skin, they are unable to return home to the ocean. Our Selkie returns to the water after drowning the man who held her captive.”

“It’s easy to imbue elemental stories like this with all sorts of meanings. I think this one is about killing the things that hold us captive and returning to the water, wherever that is for you.”

Director, Cam Veitch expands on the visual component to say: “Slip is a fever-dream fairytale that finds itself deep inside the world of the lyrics. With the song loosely based on the Scottish Myth of the “Selkie”, a ‘being that emerges from the water to shed their skin and take human form, lead singer Nabi finds herself embodying the creature as she fights her way to freedom against an oppressive, cult-like force in this gritty retelling.” Nabi continues to say “The video for Slip features a marvelous cameo performance from Canadian songwriter/poet Hawksley Workman.”

You can pre-order The Words You Spoke Still Move at this LINK.

Ellevator
The Words You Spoke Still Move Me
(Arts & Crafts)
Release Date: May 6, 2022