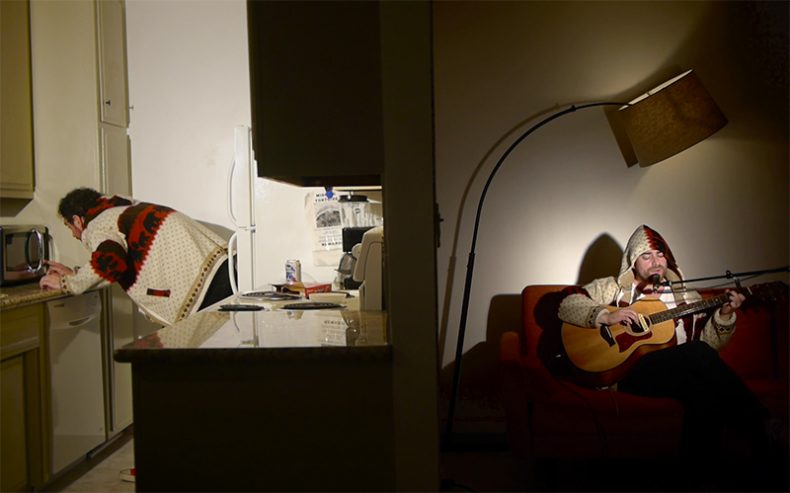 Butch Bastard is the pseudonym of Ian Murray, formerly of Sub Pop band Poor Moon, a side project of members of Fleet Foxes.

The “Butch Bastard Live” series first premiered when Murray released “Butch Bastard: Live in L.A.”, a video of himself performing an early version of his song “Magnolia” in a bed adorned with traces of dissonant cohabitation as VH1 style pop-ups appear on the screen.

In the second installment of the series, “Butch Bastard: Live in Hollywood”, Murray performs his song “Waiting For A Hot Pocket” on a couch in a Hollywood apartment, while another version of himself mills around the kitchen, quite literally, waiting for a Hot Pocket.

Murray, who also directed the video: “I like to think of this piece as a ‘live painting’. One that depicts the first world existential crisis described in the song. A regular Joe sitting at home alone, making a questionable late night food decision as he ponders the relevance of his place on Earth.”

A demo for “Waiting For A Hot Pocket” surfaced a few months ago and is temporarily available on Soundcloud. As of now the demo and this “Live” performance are the only versions of the song available.

Butch Bastard’s forthcoming LP titled I Am Not A Man features contributions from Tillman, Jonathan Wilson, and Mitchell Rowland.