New Music
65
previous article
SPILL FEATURE: IT'S ABOUT THE MUSIC - EVERYTHING ELSE IS SECONDARY - A CONVERSATION WITH KENNETH WOMACK - AUTHOR OF JOHN LENNON, 1980: THE LAST DAYS IN THE LIFE
next article
SPILL NEWS: BUZZCOCKS COMPLETE UNITED ARTISTS SINGLES 1977-1980 7” BOXSET TO BE RELEASED JANUARY 15 ON DOMINO RECORDS 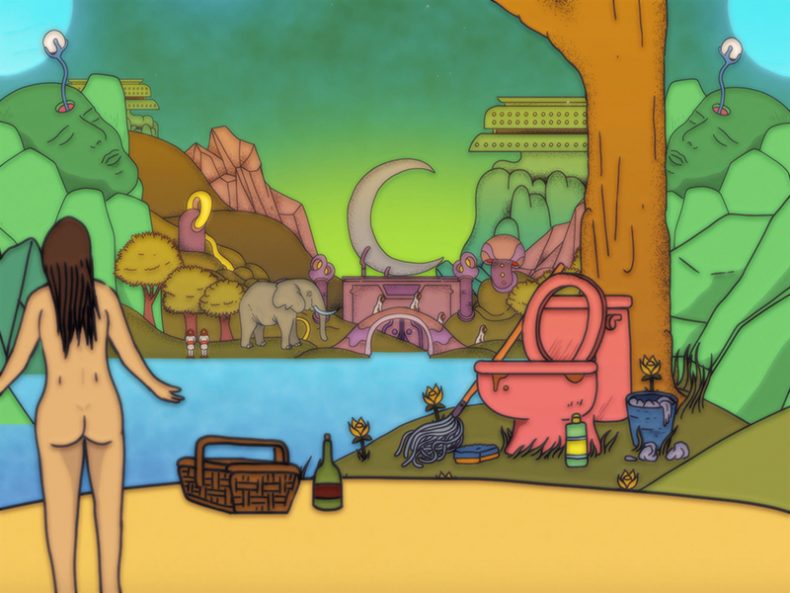 Born Ruffians today reveal the video for their latest single, “Waylaid”, taken from their new album, SQUEEZE, out now via the band’s own Wavy Haze Records. . The single “Waylaid” features the inimitable Hannah Georgas joining Luke Lalonde on vocals.

With the video Lalonde welcomes fans to, “enter into the analog dream world, first person experience of space time. Where eras and nanoseconds coalesce, folding eternally outward into golden memories.”

The video’s director and animator, Martin Macpherson, describes the making of the clip, “I wanted to explore this idea of a dreaming person as they subconsciously navigate various ways to define a romantic relationship and all that comes with it. As they float through visions of nostalgia, fantasy and impermanence they are ultimately presented with ideas that make a clear definition impossible but provides a feeling of cautious optimism, regardless of how dark things may seem.”

A mere six months after the release last April of the bold ‘n’ brassy JUICE, Born Ruffians released the spiky, psych-y SQUEEZE on the band’s own label Wavy Haze Records in Canada and Yep Roc Records (ROW) earlier this month.

SQUEEZE is the band’s seventh since guitarist/vocalist Luke Lalonde, bassist Mitch DeRosier and drummer Steve Hamelin emerged as a fully formed trio of rock ‘n’ roll oddballs from a high school in Midland, Ontario, 16 years ago. Ruffians have definitely been continuing to have a lot of fun together 16 years on, hence the ongoing “eruption” of songwriting – or “big squeeze of creativity,” if you will – that had the band planning on releasing JUICE and SQUEEZE as part of a multi-album continuum well before COVID-19 hit.

SQUEEZE is out now via Wavy Haze Records in Canada

by SPILL NEWS on January 19, 2020
BORN RUFFIANS PEN PERSONAL LETTERS TO THEIR TOP FANS WITH EXCLUSIVE NEWS OF THEIR NEW ALBUM JUICE [...]