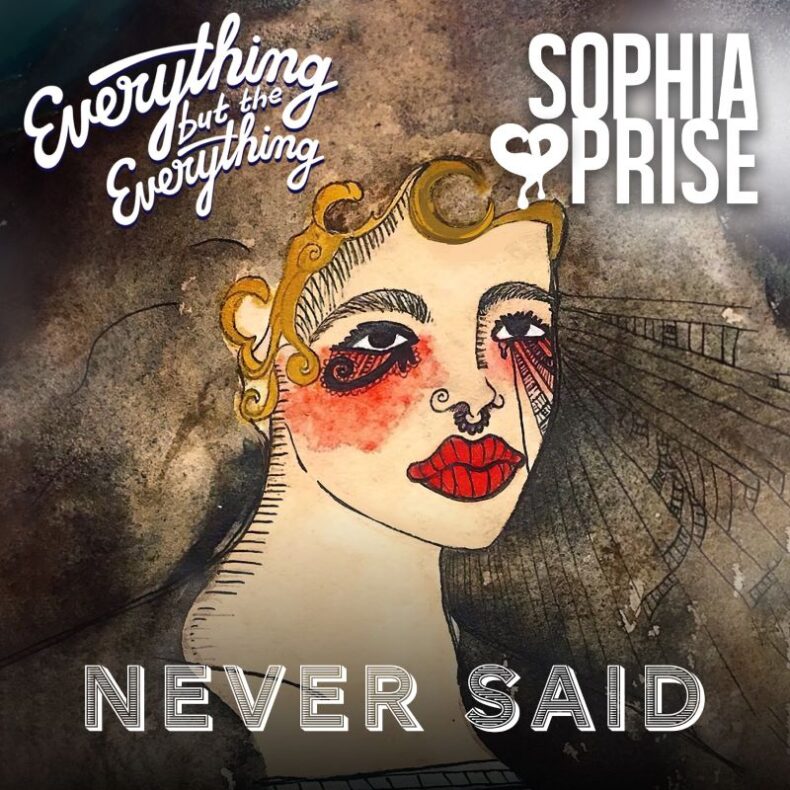 Everything But The Everything (EBTE), the project of Bay Area California musician, producer and industry promoter Izzy The Gent, has released his newest single “Never Said.” The track features guest Sophia Prise, who once again lends her vocals and is her follow-up to their prior collab “The Story,” which was released together in 2020. The New Wave/Indie project by design leads with special guest vocalists for each single. “Never Said” is available on Spotify, Apple Music and most streaming platforms today.

The pairing of EBTE with Prise’s soaring vocals is a natural one, conjuring a perfect layer of New Wave & Post Punk inspiration, set on top of Izzy’s hypnotic bass rhythms, 80’s esque guitars, analog synthesizers and powerful, yet straightforward drumming. Each guest, including Prise, is always a natural pairing, coming together from Izzy’s large network of friends and fellow musicians who he met over years of being a successful promoter in the San Francisco area. Sophia Prise is an Oregon singer, producer and musician, who with a formal background in music has since worked as a professional vocalist for multiple international touring acts.

Izzy The Gent says, “I’ve been friends with Sophia for a while which led to our collaboration on EBTE tracks “Just” and “The Story”. In continuing EBTE’s collaborations with various artists, I sent Sophia and a few other singers some demo’s but noticed they were all having trouble finding inspiration within the songs submitted. So, I offered a song swap and it worked! The ideas began to flow, and Sophia quickly sent back the draft of what became her final version for “Never Said”. Now that the band is playing live shows, Sophia Prise has become a true frontwoman and keeps the band on point”.

“With our last two collaborations, I wrote the lyrics and vocal melodies and would ask Sophia to expand on them in her own way. With our new song “Never Said”, Sophia wrote the lyrics and vocal melodies and I think she knocked it out of the park. Coming from an electronic music background to post-punk/rock n roll took a little adjustment but she’s getting into the swing of things. As she ventures further into the rock n roll world with us, we’ll continue to grow”. ~Izzy The Gent

Everything But The Everything
[Single]
(Independent)
Release Date: October 7, 2022

SPILL NEW MUSIC strives to keep our readers up-to-date with new releases by your favourite artists, keeping you informed of new album, single, and video releases. Stay tuned -- who knows, you might just discover your new favourite band.
RELATED ARTICLES
everything but the everythingmusic premierenew music

SPILL MUSIC PREMIERE: EVERYTHING BUT THE EVERYTHING – “OPEN YOUR MIND”

by SPILL NEW MUSIC on June 7, 2022
EVERYTHING BUT THE EVERYTHING – “OPEN YOUR MIND” A SPILL EXCLUSIVE MUSIC PREMIERE Everything But The Everything drops their latest single “Open Your Mind” featuring Adam Brookes. The post punk/new wave soaked track [...]

by SPILL NEW MUSIC on December 5, 2021
EVERYTHING BUT THE EVERYTHING ANNOUNCE NEW SINGLE “IN LOVE… AGAIN” (FEATURING GOLDEN PLATES) Everything But The Everything, the moniker of Northern California songwriter Izzy the Gent, has dropped his latest single “In [...]