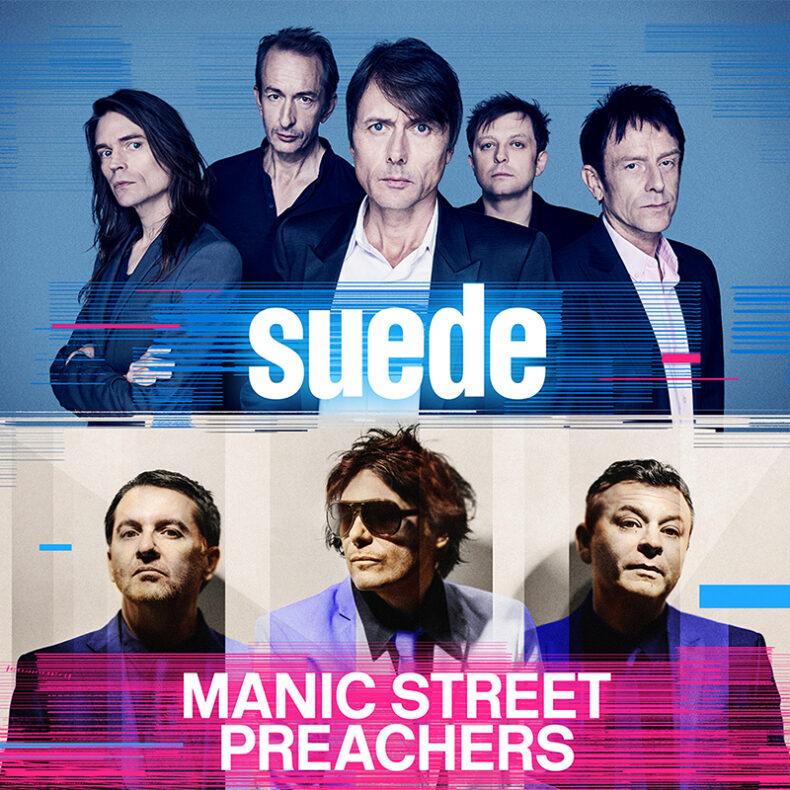 On a typical Vancouver rainy autumn Thursday night, two of the United Kingdom’s most influential and acclaimed ‘90s alternative pop-rock bands joined together atypically at the fabulous Commodore Ballroom. Suede and The Manic Street Preachers continue to release solid new music to a loyal and large world-wide fanbase, which makes it curious as to why a venue which holds just shy of 1,000 spectators would be the most appropriate location, after being moved from the much larger, cavernous PNE Forum. Whether because of the lack of radio play in the disappointing Vancouver radio market — or perhaps a live music hang-over from epidemic times — we’ll never know. However, these two veteran acts brought their A-game to Vancouver at the first stop of their 12-date North American tour, which concludes on November 24th in Toronto.

With each band taking alternating turns as headliner, the Manic Street Preachers foursome consisting of founders James Dean Bradfield (lead singer/guitar), Nicky Wire (bass), Sean Moore (drums) and touring guitarist Wayne Murray opened the show to great applause. Burning through their greatest hits set for nearly 75 minutes, highlights included classics “Motorcycle Emptiness”, “A Design For Life” and their final ditty “If You Tolerate This Your Children Will Be Next”. Bradfield and company played with the calm coolness of a band that is comfortable with their craft. The guitar-ladened cover of The Cult’s “She Sells Sanctuary”, arguably an odd choice considering the Manics’ extensive catalogue, was well-received by the voracious audience, followed by the sunglass-clad Wire quipping “We’re available for weddings and birthdays!”.

Subsequent to a short break, the quintet Suede (known as The London Suede in the USA for copyright reasons) stormed the stage. Brett Anderson (lead singer), Neil Codling (keyboards/guitar), Mat Osman (bass), Richard Oakes (guitar) and Simon Gilbert (drums) unfurled their energy onto the crowd with “She Still Leads Me On”, their first cracking single from their excellent new album Autofiction. Frontman Anderson’s explosive energy was on point as he danced, strutted, kneeled, posed and belted out a wide range of Suede singles, to the delight of the crowd. Two rocking standouts, “Trash” and “It Starts and Ends With You”, really got the audience going, when Anderson then quickly switched gears to play a very intimate guitar solo version of “The Wild Ones”. The finale of “Beautiful Ones”, from the 1996 masterpiece Coming Up, was clearly a fan favourite, with much audience participation, to end a pretty spectacular night of music. It’s been a long time since these two superb acts played and toured together, and the first time they graced the stage together in Vancouver. Hopefully it’s not the last time.

John Graham is a Vancouver-area resident who typically spends most days admiring music of all genres. When not listening to music, John is usually at a live show, somewhere in the bowels of Vancouver.
RELATED ARTICLES
live reviewmanic street preachersthe commodore ballroom

by Samantha Wu on October 19, 2022
WARDRUNA @ MERIDIAN HALL, TORONTO OCTOBER 19, 2022 Magic happens during the month of October and what better time to welcome a unique Norwegian musical group dedicated to [...]