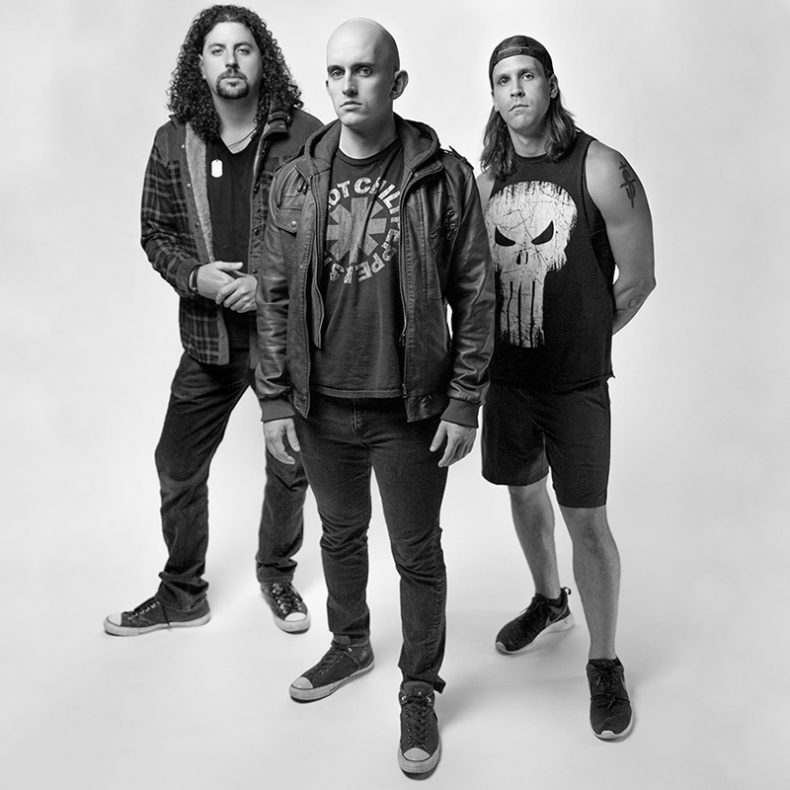 After a series of unavoidable delays, Pennsylvania’s Small Town Titans has returned with its long-awaited release party for their 2020 album, The Ride. The critically-acclaimed record from the power trio was a definite favourite this year, and the livestream saw the hard rock outfit getting together in their studio – a familiar setting to those who’ve watched their recent music videos – to bring the album to life in an exciting, polished, and explosive fashion.

Performing all 10 songs from The Ride in its entirety, the band kicked off with the throat-wrenching scream and climatic opening of “Ruffing Feathers”. The band was in top form with vocalist and bassist Phil Freeman switching seamlessly between gruff melodies and aggressive screams. Guitarist Ben Guiles jumped across the stage, ripping riffs and lead lines with a tone that cut through the air, while Jonny Ross held a heavy foundation with a tight groove behind the drums. Furthermore, the vocal harmonies between all three members were enough to send chills down your spine. If they were only getting warmed up on “Ruffing Feathers”, by the time they hit the following the track, “The Man”, Small Town Titans were an absolute powerhouse of a band, stream rolling over their heaviest of songs with the sound of a band twice their size. 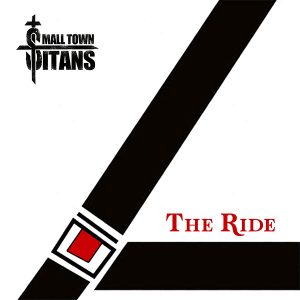 What was especially exciting about The Ride Release Party was the audio and visual quality of the livestream. Running through a live studio setup, the audio was professionally mixed on the fly to sound equally clear and massive. This in itself was a relief as the primary challenge of a live stream concert is delivering an audio and visual experience that enhances their performance, rather than hinder it. Aside from taking breaks between numbers to share quick stories about the writing and recording of each song, and reading aloud live comments left by fans watching, Small Town Titans put together a seamless show that continued forward with a sense of flow that felt organic.

Musically, the band tackled the incredible harmonies of “Behind The Moon”, the shifting tones of “Let Me Breathe”, the sleazy vibe of Marcy’s Playground cover, “Sex And Candy”, and the grunge-inspired ballad “9 To 5” with a level of conviction. Additionally, the relentless “Universal Limits” and “When It All Comes Down” were as hard-hitting as they come. Just as it was with The Ride upon its release last November, watching Small Town Titans live was a master class in performance, while further demonstrating the strength of their songwriting. On top of the stellar performance of their record, the band dove into System Of A Down’s “Aerials” in a manner that rivalled the original.

In all regards, Small Town Titans are a band that everyone, everyone, should know. They should be considered leaders among the growing underground rock scene, and should be on the verge of making it – whatever that means these days. If The Ride Release Party demonstrates anything, it’s that Small Town Titans has everything it takes to be your next favourite band. The range demonstrated in their songwriting is matched by the visceral and musically sophisticated nature of their performance. In short, Small Town Titans’ The Ride Release Party is among the best livestream concerts I’ve watched in the last year.

A passion for music has always been a part of Gerrod’s life. As a young boy, he was raised on a steady diet of the music from The Chili Peppers, Aerosmith, The Stones, Prince, and others from his mum. Raised in the GTA, Gerrod continued to foster his love for music by attending a wide range of concerts and learning the drums. His unapologetic passion for music has no bounds and has spread to a wide variety of styles, whether it be the 90’s rock that sound tracked his teenage years, the jazz he studied in university, or his newfound love for hip-hop. He recently received his bachelors in music and education from York University and is passionate about writing and reviewing good (and less than good) music. Gerrod is also the drummer and songwriter for a Toronto based rock & roll band, One In The Chamber.
RELATED ARTICLES
antifragile musicfeatureslet me breathe
7.0

by Gerrod Harris on January 29, 2021
The Luka State Fall In Fall Out AntiFragile Music While many bands may list The Clash as one of their inspirations, few often deliver on a sound reminiscent of the quintessential [...]

by Gerrod Harris on December 9, 2020
CATCH THE WAVE AND TAKE THE RIDE A CONVERSATION WITH SMALL TOWN TITANS’ PHIL FREEMAN Having released their sophomore [...]
9.0

by Gerrod Harris on November 13, 2020
Small Town Titans The Ride AntiFragile Music Perhaps best known for their viral covers – from rock classics like Queen’s “Fat Bottomed Girls” to their most viewed video, “You’re A Mean [...]