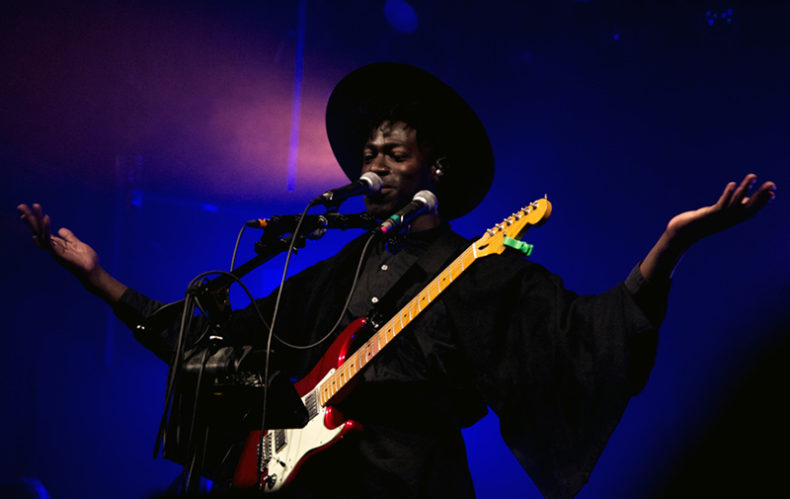 The beginning of October is the last chance to really go outside and do something at any time of day before the Canadian winter approaches; like go to a live music show in Little Italy in Toronto. This sets the mood for Moses Sumney’s first Toronto headlining show. He is touring with acoustic guitarist Angelo De Augustine.

The crowd was mostly made up of young millennials, some seemed to have known Moses’ prior work, and some came to discover new talent. But that doesn’t mean there wasn’t a few older folks there too. The environment was intimate and everyone crowded as close as they could to the stage, but not rock concert close. Comfortably close. At half to 9pm, Moses himself arrived on stage to give a warming welcome to his opener De Augustine and encouraged everyone to be quiet and listen.

With just one acoustic guitar, De Augustines’ songs still felt complete; no backing synth or drum beat was needed to fill any silences. His voice was incredibly soft and breathy. Great music to help you feel calm; really calm.

After a relatively short set, it was time to wait for Moses. There was a 45 minute gap between the two acts. Don’t know if they had some issues backstage but for a venue as small as an elementary school gym, it was too long for a completely standing crowd of 200 or so.

Finally at 10pm, Moses Sumney came through the blue misty lighting like a shadow in his black wide brim hat and black jumpsuit. There were 5 orb shaped lights that changed colours accordingly with the venue lighting. He was joined by background musicians who played saxophone and bass guitar. As soon as he began singing, everyone became deeply engaged. He played lead guitar for some songs, playing his guitar like a harp. Moses is able to hit an incredible amount of notes, especially high ones. He uses his voice much like an instrument. For example in his opening song “Self-Help Tape” from his debut record Aromanticisim, he weaves through high and low notes that are incredibly soothing, but also distinctly his.

A key song that really got the crowd cheering afterwards was “Make Out In My Car”. The core beat is a slow, sexy R&B beat. It’s flute fluttered as the song progressed. Once again he uses his voice as an instrument for the melody.

Aside from the songs themselves, he also likes to talk between songs. Before “Make Out In My Car”, he explained that it’s about that moment when you hang out with your crush and they’re dropping you off at your house and you want them to kiss you, but they just awkwardly leave and say, “yeah… fun night! bye!”.

That explanation actually kind of added to the listening experience. It accentuated that feeling of the lyric, “I just wanna make out in my car.” . That lingering onto a moment, not wanting to end the conversation because the sexual energy is vibrating in this enclosed space. Really felt that after the song.

Overall, Moses Sumney knows what his vision is. His persona is concrete, his voice is incredibly distinctive, and the music is soft, yet seductive. He’s an artist to keep an eye on and check out his debut LP, Aromanticisim.

Vicki Mahony is taking her hobbies of concerts, photography, and ranting and putting them to good use! She is a live-music photographer and reviewer.
RELATED ARTICLES
angelo de augustinearomanticismdoomed
7.0

by Kieran Davey on September 24, 2021
Sufjan Stevens & Angelo De Augustine A Beginner’s Mind Asthmatic Kitty Records Sufjan Stevens has never been one to shy away from gimmicky concept [...]
9.0