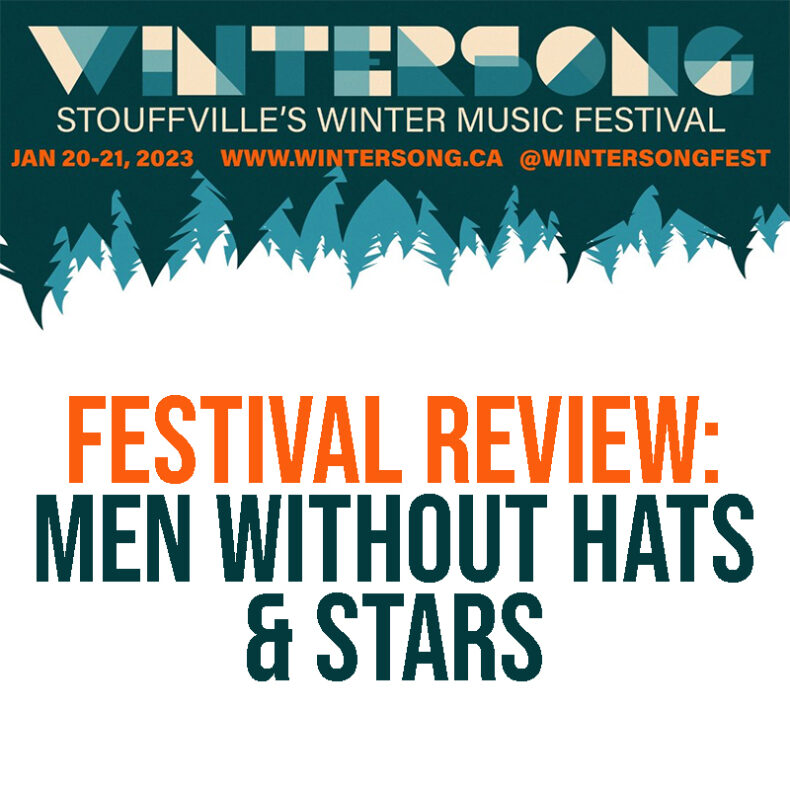 Whitchurch-Stouffville was the place to be on a damp, cold and snowy January day for some very exciting music. Bringing the Wintersong Music Festival to a close, Men Without Hats and Stars put on shows that were absolutely brilliant. The audiences were treated to two one-hour sets that overflowed with energy, excitement, and fantastic music. The Wintersong Music Festival was two days of music throughout Stouffville. An incredible variety of music and venues.

Men Without Hats hit the stage in the early evening and got the show going with “The Safety Dance”.  Ivan Doroschuk’s energy and voice were as good as ever and for a moment time stood still and for it was The Diamond Club in 1982. The band was tight, genuinely seemed to be having a good time, and were more than happy to spend some time with a very appreciative audience. Ivan’s brother Colin, who has been with the band since the beginning, had to bow out of a few shows, so in his place, his daughter Sahara Sloan filled in on vocals and keyboards. She made her uncle (and father) proud. Her singing in “I’ve Got The Message” was spot on and she fit in with the band perfectly.

Of course they played their hits, including “I Like”, “I Got The Message”, “Where Do The Boys Go”, “Pop Goes The World”, but they also dug deep and performed some unexpected treasures. It was great to hear “Head Above Water” from 2012’s Love In The Age Of War and “On Tuesday” from 1987’s Pop Goes The World, as well as their debut single “Antarctica”. They also performed songs from their recent album Again 2 (“If The World Should End Today”) and a couple of brilliant covers from 2022’s Again 1 EP. Hearing “2000 Light Years From Home” live, one could be forgiven for thinking this was a Men Without Hats song. Also from Again 1, they performed “Blow At High Dough” as their first encore, which was met with a great deal of enthusiasm from the crowd. They ended the night with their wonderful version of Abba’s “S.O.S”, which they had recorded on 1989’s The Adventures Of Women And Men Without Hate In The 21st Century, which was a lot harder than their studio version.

It should be noted that the last song in the set was the 12-in version of “The Safety Dance”–“for those of you who got here late,” joked Ivan. It was the perfect end to the all too short set. They could have easily played another few hours and that still may not have been enough. Men Without Hats are a stunning live band, visually and musically. Ivan is always fun to watch and the band seemed to be enjoying themselves as much as the audience.

Stars closed out the night with their own blistering set. Like Men Without Hats, Stars hit the stage and instantly won the crowd over with their opener “Pretenders”. The performed their hits (“Trap Door”, the timely “Take Me To The Riot”, “Hold On When You Got Love And Let Go When You Give It”), and also dug into their catalogue and provided some surprises. They featured four songs from their most recent album, Capelton Hill, but also dipped into 2004’s Set Yourself On Fire.

The band was tight and create a a very intimate evening between them and their fans. They appeared to be having a great time and enjoyed being there. They ended their set with the brilliant “Midnight Coward”, which was a stunning way to end the show. They returned for the encore, performing the title track from their 2014 album, “No One Is Lost”. And the night was over.

As the band prepares for a 2023 European date, one could see how they were setting a solid set list for that tour and perhaps trying out some songs live, especially from their most recent album. Everything fit together and it was pretty much a perfect night.

Born and raised in Whitby, Aaron discovered music through his love of The Beatles. This led to a career in radio, writing for various publications, and ultimately a radio show about The Beatles (Beatles Universe), which ran for over four years. When not immersed in music, Aaron enjoys spending time with the loves of his life -- his wife Andrea, and daughters Emily and Linda (all of whom have an intense love of music too).
RELATED ARTICLES
festivalif the world should end todaylive review

by Aaron Badgley and Bryan Williston on April 25, 2020
APPALACHIAN FOLK FESTIVAL LIVESTREAM CAST FROM VARIOUS LOCATIONS APRIL 25, 2020 The West Virginia area has a very healthy and diverse music community, which the Appalachian Folk Online Music Festival brought to the world this past week. These [...]

by SPILL EVENTS on August 2, 2019
OSHEAGA 2019 @ PARC JEAN-DRAPEAU, MONTREAL AUGUST 2-4, 2019 Day 1 Dear Rouge What a great weekend opener! Their infectious energy really set the vibe of the music festival. Although the crowd at the time was fairly small, lead vocalist Danielle [...]