SPILL FEATURE: DANCE TO THE PERFECT MESS – A CONVERSATION WITH CARL MARSH OF SHRIEKBACK 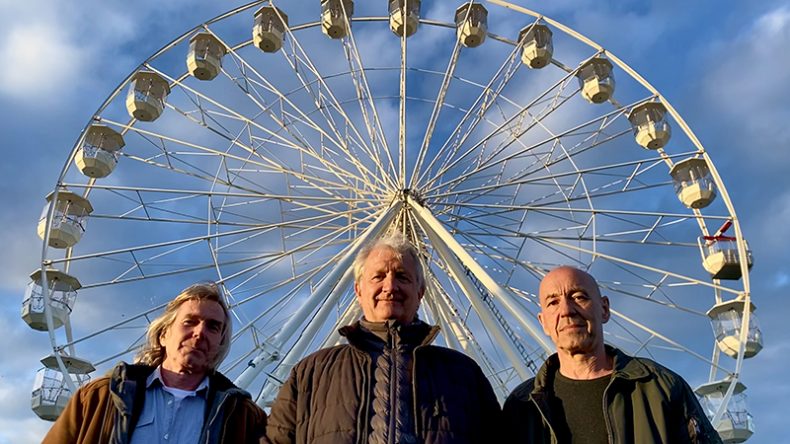 DANCE TO THE PERFECT MESS

A CONVERSATION WITH CARL MARSH OF SHRIEKBACK

Shriekback’s music has always been difficult to pigeonhole. Part of the post-punk, new wave scene, their music contained elements of funk, rock and sometimes ambient music. Barry Andrews, formerly of XTC, and Dave Allen, previous member of Gang Of Four, formed Shriekback in 1981, with Carl Marsh of Out On Blue Six joining soon after. One just never knew what to expect when cracking the plastic on a new Shriekback album. The same can be said with their most recent release, their 16th studio album, 1000 Books.

“A book read by a thousand different people is a thousand different books” from Andrei Tarkovsky’s Sculpting In Time is the inspiration for the album’s title. It seemed quite appropriate, as Shriekback’s songs have always attracted diverse interpretation. The title track, or “The song itself began as a very abstract and improvised piece, different every time we played it,” recalls Marsh. “Unlike the rest of the album, which became fairly tightly routined as we approached studio time, we had an idea that this track would continue to be improvised through the recording process. I’m usually fine with this idea, but in this case I sort of lost my nerve, mainly because it was too hard to develop a lyric and vocal over such a random piece… and, unlike the early days, we didn’t have unlimited time to follow ideas through. So it was structured, although there was more improvisation and layering than on some other tracks. At various points we had extensive piano sorties, a fair bit of feedback guitar, then it got reeled into what you hear. I really like the organic shifts in tone and rhythm, and how the drums work in a way you might not immediately think of as a Shriekback groove.”

“Lyrically… another ‘what have we done with all this time, why are we still here, what’s next?’. A sort of coda to Space In The Blues, I suppose – we ‘cry into the future’, but at least there is a future. Different books, different futures, alternative realities… or alternative facts? Jeez.”

The album comes very quickly on the heels of 2019’s Some Kind Of Light. The band has also been very busy reissuing older albums as well as releasing outtakes and live performances, including a live show recorded at Toronto’s Larry’s Hideaway (“Ah yes, dear, dear Larry’s,” recalls Andrews). In other words, they have been very busy. Barry Andrews comments it comes down to the band having much more freedom today than when they were signed to a major label. 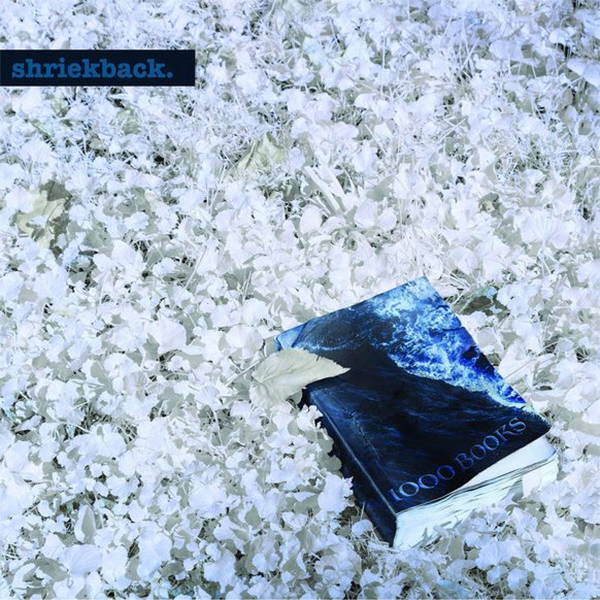 “I guess it’s actually just our natural groove. In the old days, record labels wouldn’t let you do another album till they were satisfied you’d rinsed the one you’d last released, in terms of touring and promotion. Fair enough, I guess, but it meant at least a couple of years between records. Always struck me how lucky painters and writers seemed to be – just to be free to churn stuff out whenever they felt like it.

“Now, and thanks to the generosity of our amazing punters and the tech through which this largesse can be manifested, we can keep working as we’re feeling it. Which is really the best present a boy could have.”

Craig Marsh adds “The three of us that now constitute Shriekback have now been working together for 40 years, on and off — quite a lot of of ‘off’ for me, I admit — so we have a pretty well-established toolkit of writing strategies both as a group and as individuals, and having decent home setups helps a lot, so, in terms of just coming up with songs, an album a year isn’t a problem at all. We all contribute to the writing, and Barry and I share the lyric duties, which I personally find the most labour-intensive part, so hey… Tunes R Us. What slows it down is inevitably money, or the lack thereof. If we record at home, mostly individually, it takes longer and we all have to do other things to pay the bills. Crowdfunding has changed everything – for the last two albums we’ve been able to write and record in a very focused way and raise the bar in terms of sonic quality. It has put more pressure on in terms of hitting deadlines and staying on budget, but mostly in a productive way. So an ongoing huge and sincere thanks to everyone who helped make that possible.”

Their most recent album, 1000 Books, released in December, 2021, is full of strong tunes, but is a bit on the dark side. “I’m hearing people describe the album as ‘melancholic’ or ‘elegiac’, which is definitely a big part of it,” said Marsh. “I guess it’s more reflective and less angry or aggressive than parts of Some Kinds Of Light, when I was still railing against Brexit on All About Nothing and Barry was doing Bollo Rex and Hyperactual… Brexit happened anyway, Trump lost and we’ve all been locked down for two years and there have been many different reactions to that. The album has a sense of… not resignation, but an acceptance that we will not, maybe, get everything we wanted or do everything we wanted to do. There’s also the need to feel that there’s a ’story’, a narrative that we’re a part of and that makes sense of things; when we haven’t been able to interact face-to-face the story gets stalled, or refracted through the lenses of social media or other substitutions. That’s partly what inspired Different Story – how do you have a boy-meets-girl story when boy can’t meet girl, or the background is not youthful hope and adventure but premature loss and disillusionment? When the ‘natural’ story arc is disrupted, possibly irrevocably, we are driven to create a new one… “obsessively charting our last days on earth”. But we’re a resilient bunch – put “Unholiness” on and dance to the ‘perfect mess’.”

“Well, we don’t sit down and plan this shit, obviously, or it’d be much more coherent, but what just emerged from me and Carl’s separate introspections was this unscheduled and plaintively sincere wail of sadness,” adds Andrews. “It’s hard not to sound like you’re overdramatising your wanky 1st world problems but there are (in the words of the song): ‘a few things that have been brewing’. Mortality perhaps in pole position – we’re all in our 60’s, man – we’re running out of road. How’s that for a Universal Theme?

Plus the world is generally, unarguably, in very worrying shape. When we were young punky types running around being vaguely ‘political’ we really didn’t know we were born. 3 Day Week, power cuts, the Troubles, Thatcher? 2022 says: how about we raise you: heat-death of the planet, global collapse of democracy and the End of Facts (oh, and throw in a Plague). We used to say the personal has become political, us little post-punks of ’81 with our Rock Against Racism gigs and our speed come-down alienation – how little we knew…” 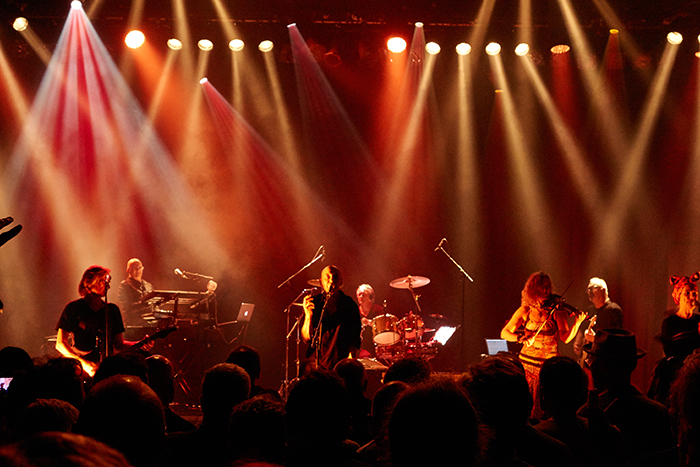 In the end, it is always great to have new music from Shriekback. As there is no chance of a North American tour, we can enjoy some old live shows that the band have made available to fans.

According to Marsh, “Well, sometimes things just turn up at the right time. The recent CD set of NYC shows came from recordings made by one William Dana Lynch (Bill Lynch, as I knew him when I lived in New York). He offered them to us when we were looking for interesting extras for our crowdfunding bid, so the time was right. I’m mentioning him by name ‘cos somehow he didn’t get a credit on the CD. I’ve apologized personally, but hey.”

Andrews adds, “I sometimes wonder if it’s best to leave such events in the mists of history and let a beneficent miasma enfold the harsh and screechy noises and hateful Oxfam trousers. But no, we thought, let us not flinch from this terrible thing but package it and sell it on the internet”

Andrews sums up the intention of the album beautifully. “I guess, as usual, it’s a wave over the parapet of the ego to other humans, a support group for our Predicaments, a museum of Things We Like; an invitation to a car-boot sale/magic lantern show/drunken autopsy. That sort of thing.”

And it looks like the band has no intention of slowing down anytime soon. Andrews takes a look at Shriekback, as a group, and what not only keeps them together but feeds their creativity. “Well, we work in a tradition. All the best bands do, I think. You spend a long time, like any artist, finding a voice, but bands are more complicated because, as I said earlier, there’s always money involved and it’s always, to a greater or lesser extent, collaborative, which takes a lot of working out. But yeah, after a lot of trial and error you get this way of expressing yourself which is, if you take care of it, authentically yours. In Shriekback it’s more complicated still because Carl and I seem to share an artistic voice when we do Shriek stuff. Not the same but definitely closely related. Entirely unplanned and impossible to fake. It’s a weird miracle…

“With Mart, the empathy is a musical one which he and I have had since the get-go – one of those ‘finish your sentences for you’ things, only with noises. And it’s good to have at least one accomplished musical technician on the firm. Adds gravitas.”

Born and raised in Whitby, Aaron discovered music through his love of The Beatles. This led to a career in radio, writing for various publications, and ultimately a radio show about The Beatles (Beatles Universe), which ran for over four years. When not immersed in music, Aaron enjoys spending time with the loves of his life -- his wife Andrea, and daughters Emily and Linda (all of whom have an intense love of music too).
RELATED ARTICLES
1000 booksalbum reviewalbum reviews
8.0

by Aaron Badgley on December 3, 2021
Shriekback 1000 Books Independent  Shriekback returns with their its first album since 2019’s Some Kinds Of Light. It is the fourth studio album to feature the core trio of Barry Andrews, [...]