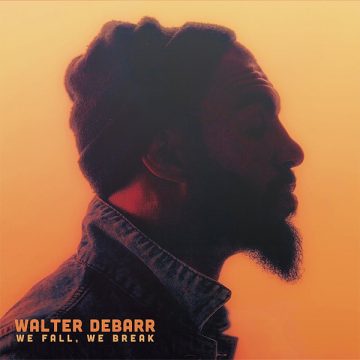 Walter DeBarr has delivered his six-song, impressive debut EP after years of what one may call a colourful life. Prison, addiction, and hard living have all contributed to DeBarr’s music. Although it is clear he has spent a good portion of his life absorbing many artists, the sound he has developed is clearly his own.

Lead single, “Quicksand” (which features Sarah Rudy of Hello June) is a great song, but not the best song to represent what people will hear on the complete EP “Quicksand” is beautifully arranged, their vocals wonderfully come together, and it is easily the most instantly accessible song on the EP. However it is not indicative of the entire We Fall, We Break.

That is not to say the rest of the EP is not as melodic or as well-arranged, quite the opposite. But his rough vocals (think latter day Tom Waits) do take a few moments to get used to, but it is well worth the time and effort. DeBarr mixes Americana folk with rock and blues and the end result is quite good. He knows how to arrange a song and he is able to not over produce himself. There is a full band but it does not detract from the roughness and honesty of each song.

The EP is built around the title track, “We Fall, We Break”. DeBarr is a talented lyricist and the EP has the theme of confronting past ghosts and struggles and surviving. “We Fall, and we break. We all make mistakes” he sings, and of course he is right. His mistakes may have been more on the severe side, but the point is well taken. We Fall, We Break is as much about redemption as it is about discussing hardships.

The EP ends with the beautiful “Oceans” that feels Celtic in origin. It’s sweeping music as he sings a heartbreaking song to  his daughter about her own future journeys. Much like Dylan’s “Forever Young”, “Oceans” is a comforting song to a child from a very caring father.  “Just remember the oceans and the deep blue sea couldn’t keep you away from me”. It is a beautiful way to end the EP.

Walter DeBarr is a new talent and his debut EP is very impressive. It is an EP of solid, heartfelt, honest songs. It is an album that will touch many souls and remain spinning well into 2020.

Born and raised in Whitby, Aaron discovered music through his love of The Beatles. This led to a career in radio, writing for various publications, and ultimately a radio show about The Beatles (Beatles Universe), which ran for over four years. When not immersed in music, Aaron enjoys spending time with the loves of his life -- his wife Andrea, and daughters Emily and Linda (all of whom have an intense love of music too).
RELATED ARTICLES
album reviewalbum reviewsorphan records
8.0