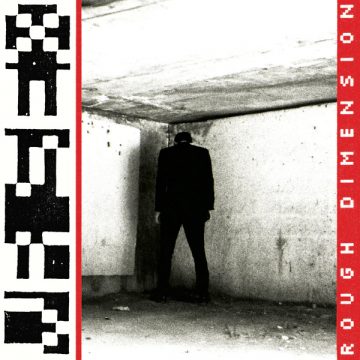 Andrew Clinco, the man behind the mythical Drab Majesty, is back with his post punk/anti-pop release, Rough Dimension. Recorded again with Ben Greenberg of Uniform fame, it checks all of the right boxes that one has come expect from VR SEX, but is so well-produced and focused that it is an Album Of The Year contender.

The opening track, “Victim or Vixen”, is a good example of how far the production and songwriting has come. It has a mix that makes distorted vocals, harmonies, and alt guitar tunings all as distinguishable and oppressive as they are supposed to be. “Live in a Dream” is as punk rock as the Stranglers and Wire. Its guitar work is heavy while at the same time intricate, almost folk-like. The first half of “Walk of Fame” is the most Drab Majesty -like, deriding fame and love while being dreamy, then abruptly going psycho punk. This is where Rough Dimension has figured out the proper blend of quiet beautiful melodies that collide with sonic noise, while at the same time keeping it listenable.

“End of Vision” is as dark as it gets even on this release. It’s the type of song you would hear at a Goth nightclub in the 1980s. Many projects can try to get this sound but this is spot on. “Snake Water” closes as a musical master class of guitar work and synths, and pops and just like that it disappears.

It is an zmazing, listenable, and possibly danceable record. Just what fans are waiting for.

Ex-pat living in Geneva, Switzerland from the hard streets of Baltimore, Maryland. Ex-radio-monkey and avid listener of all things that are supposed to be cool.
RELATED ARTICLES
album reviewalbum reviewsdais
8.0