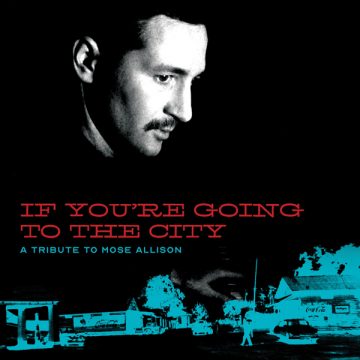 Various Artists
If You’re Going To The City: A Tribute To Mose Allison
Fat Possum Records

Mississippi-born  Mose Allison passed away November 15, 2016. If You’re Going To The City: A Tribute To Mose Allison is a posthumous nod to the man and to his cool, jazz-inflected blues and blues-inflected jazz.

Taj Mahal introduces this set, setting just the right tone with “Your Mind Is On Vacation”. Others who contribute to the vocals encompass a wide range of musical styles: Robbie Fulks , Ben Harper and Charlie Musselwhite, Chrissie Hynde tackles “Stop This World”. The sly humour of “Ever Since The World Ended” suits Loudon Wainwright completely. Richard Thompson adds to the list of British covers with a lovely live performance of “Parchman Farm”, and Iggy Pop comes on like Elvis Presley on the title track, with its idiosyncratic and thoroughly modern backing. Peter Case manages to sound like both Mose and himself vocally on “I Don’t Worry About A Thing”; he keeps it very cool. Frank Black contributes an alt-bluesy “Numbers On Paper”.

Then there is Jackson Browne, The Tippo Allstars with a fine vocal by Fiona Apple, Bonnie Raitt, Dave and Phil Alvin, the aptly named Anything Mose!, and Amy Alison duets with Elvis Costello to close out the set.

The CD and LP packaging includes a DVD containing the 2005 BBC documentary on Mose, Ever Since I Stole The Blues. It is a fine bonus, but the set stands up extremely well on its own merits. If you have any interest in any of the artists mentioned in this review – including Mose himself of course – then you’ll certainly enjoy this release.

The Spill Magazine is a Toronto-based online publication dedicated to covering the independent music scene with a strong focus on our thriving hometown talent. Our writers bring you up-to-date news, in-depth features on musicians and reviews for the latest CD releases. We also travel to the front lines for all local festivals including Canadian Music Week and North by Northeast. Don’t forget to check out our Facebook and Twitter pages for all daily Spill updates.
RELATED ARTICLES
album reviewalbum reviewsfat possum records
9.0