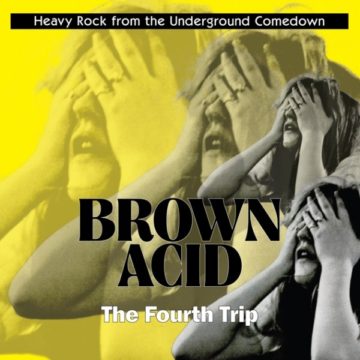 The terms “Rare Tracks” or “Deep Cuts” would be vast understatements when describing the exclusivity of the songs that are offered up here on Brown Acid The Fourth Trip.  The extensive research that went into digging up these ‘next to impossible to find’ tracks is nothing less than staggering. All selections came from records that were released on very limited runs, and some that were never even distributed, and could only be sourced through surviving band members of a bygone era.

Kicking off the obscure jams is an incredible 1969 track by Texas psychedelic hard-rockers Kanaan. The band sounds like a mix between Blue Cheer and Cosmic Blues Band.  Their raw hard-hitting sound and rat-wild vocals would put a serious tear in your 60’s Westinghouse speakers. Hearing the wobble of the tape confirms that it was an analogue to digital transfer, one of the very unique highlights of this release.

Next up we have another 1969 fuzz gem from Stone Garden titled “Oceans’ Inside Me”, a wonderful Creamesque ear-splitter with raging guitar leads and crazy ass drum fills. The production is tight and the performance even tighter, these guys would have been amazing to see live I’m sure. Following this beauty, we’re punched clean in the face with “Carry Me On” by Columbus Ohio’s Headstones (not to be confused with Toronto’s jock rockers of the same name). “Carry Me On” is the first pick with some serious vocal harmonies that really accent the song’s verse with a Flo & Eddie type feel. You can really hear the vinyl crackle on this track, accenting the retro vibe ever so nicely. Up next is Canton Ohio stoners Wrath with a fantastic track titled “Rock’n’Roll Fever”. Taking some obvious influence from bands like Rush, Black Sabbath, and Led Zeppelin, these guys really concentrate on timing, breaks, shots and syncopation. To nail a track like this live off the floor you’d have serious players. This instrumental track acts as a great segue way as we head to the midway point of the record.

The Deep Purple inspired Bungi kicks out the jams with a great track titled “Numbers”.  Another band with some fantastic harmonies who give us what we want with long meandering guitar solos, John Paul Jones bass licks, and a superb build up at the end of the track. The band takes no shame with the stoner rock persona as they sampled sounds of joint toking during the intro.

One of my favourite tracks comes in at number six with Erving Forebrush’s “The Train”, it’s a lighting speed 2/4 rocker with no concern for perfection. This sounds like something recorded live at a rehearsal space, and saying it has killer feel is understating the obvious.  It’s a great way to peak the record’s intensity before rolling back into some mid tempo jams.

Zekes takes fuzz and cowbell to a new dimension. Never have I heard such a low-fi fuzzed out opening guitar riff. I highly respect the original tape transfer integrity where you can actually hear the left channel cut out at times.

Bad Axe’s track “Coachmen” sounds like something pulled straight off of a Mothers of Invention album, or one of those raunchy jams from Frank Zappa’s Hot Rats. The blazing upbeat tempo kicks things into fifth gear for three absolutely fuse blowing minutes. The song undoubtedly puts the psychedelic exclamation point down with seriously tripped out vocal effects near the end, and an outro riff that will blow your mind.

It’s raining Sabbath riffs, and Ash’s track “Warrant” warns us of the pending storm. This jam takes us back to very early Sabbath recordings, with complex rhythms and Cactus style guitar leads. The ghost train effect used at the 2:41 mark of the song sends it off with a haunting creep factor.

Axas’ “Lucifer” sounds like a ritualistic call for Satan. This ceremonious falsetto piece is tripped out to the max with a heavy dose of Iommi inspired riffs and screamin’ guitar leads, that will leave your ears buzzing for days. The musical arrangements on this track are incredible with harmonized guitar leads leading up the song’s intro. As the vocals are introduced you get the unsettling feeling in your stomach that these dudes are up to no good. With lyrics like “The end is near for all mankind” it’s obvious they are on a mission of evil, and somehow cosmically ended up as the closer on this amazing release 41 years later.

This release will definitely end up in my vinyl collection, as will all previous Brown Acid trips released by Riding Easy Records. I urge all fans of the above referenced bands to pick up a copy of Brown Acid The Fourth Trip immediately. Very rarely does a release merit 5/5, but you’re looking at one right here!

Andre has been writing for The Spill Magazine for over 12 years, dating back to the print days. His passion for music goes far beyond writing reviews for new music and live concerts, he is also an active musician and producer on the Canadian music scene. Having toured North America and Europe with various acts, he is no stranger to dedication and work ethic new bands must endure to make the grade in today's market; Andre always delivers perspective writing that is authentic and to the point. Mr. Skinner typically covers indie rock, grass roots, electronica and is our resident hard rock and heavy metal specialist. He is extremely selective on what bands he covers for articles and you can rest assured they are ALWAYS band to watch with something left of centre to offer.
RELATED ARTICLES
album reviewsridingeasy records
10