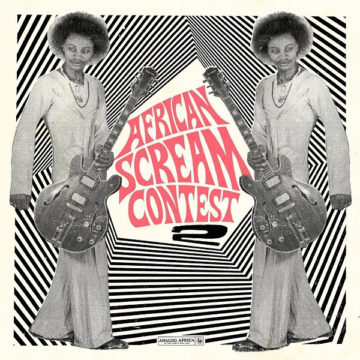 From the first of the album’s 14 songs, Les Sympathics de Porto Novo’s “A Min We Vo Nou We”,  African Scream Contest 2 is a musically impressive ride. Crunchy guitars, grooving drums, and soaring vocals combine effortlessly as they rock through the 6.25-minute long opening track and set the mood for a fun, funky, and groovy listen. Further into the album Lokonon André et Les Volcans’ “Glenon Ho Akue” showcases the talent of Lokonon, who was instrumental in tracking down the artists for the compilation.

One of the great things about African Scream Contest 2 is that it crosses and fuses musical borders. Tracks throughout the entire album feature Vodun-inspired Afrobeat, American rock-influenced riffs, and psychedelic hard funk among hints of many other genres. African Scream Contest 2 is a fantastic collection of Beninese creativity and serves as an excellent introduction to the world of East African Afro-funk.

I am an Edmonton based musicophile and photographer who loves experiencing music whether it's live or on my turntable. I play seven instruments and go to a lot of concerts.
RELATED ARTICLES
album reviewalbum reviews
10