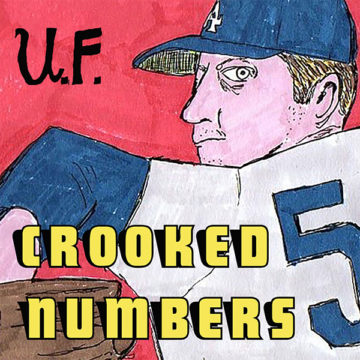 On Crooked Numbers, Unlikely Friends trades in being the “best hardly-known indie pop band in the Pacific northwest” for the title of “the indie pop band that everyone in the Pacific northwest will soon not be able to shut up about.” The Seattle-based group who, for some time now, have been quietly cultivating and refining their infectious brand of indie pop, have struck gold with Crooked Numbers. Over the span of an ambitious and sprawling 15-track record, the group wastes no time in effortlessly trying to get your feet to uncontrollably move. As instantaneous and as feverishly as they did on 2015’s Solid Gold Cowboys, they succeed in many attempts to do so throughout the new record.

Opting this time around for a fuzzier sound, the addition of multi-instrumentalist Mark McKenzie and producer Jackson Justice Long proved to be a wise decision, as they help gracefully guide the vision of the album. Tracks like “Cut Loose” easily demonstrate the undeniable magic that’s shared between Crane and Bert, as they showcase how to successfully weave between swing-inspired rock ’n’ roll and meaty, arena-sized choruses.

On album highlight “The Best Trick in Modern Science,” despite being one of the shortest tracks on the album, the song manages to encapsulate the entire aura that radiates off this band over the span of 15 songs. In the span of a minute and 20 seconds, the track delivers on being an honest representation of the chemistry that’s been cultivated over the span of two records between D. Crane and Charles Bert. If 2015’s Solid Gold Cowboys saw them tackle themes of modern-day millennial anxiousness through a humorous veil of satire and pessimism, Crooked Numbers finds them filtering that anxiousness and confusion though a more tightly-focused tunnel vision that’s slightly more optimistic and wide-eyed about what’s to come.

Carlos Cajina is a documentary photographer and writer based out of Toronto. With a passion for storytelling, his love of photography is equally matched by his passion for music. At night, he moonlights as a freelance writer and music journalist, covering the latest in local and independent music culture for various blogs and outlets.
RELATED ARTICLES
album reviewscrooked numbersswoon records
10