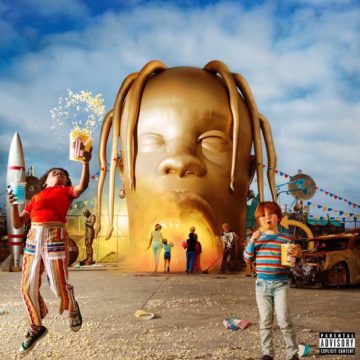 Following his second debut album, Birds in the Trap Sing McKnight and his collaborative project with the Migos’ very own Quavo in HunchoJack, Travis Scott finally has released his highly anticipated album, Astroworld. With 17 tracks on this album and incorporating some of the biggest artists in music, this project shows how diverse and talented Scott can be.

The entire album is amazing.   One thing that the album does well is to be very diverse. Travis Scott is not afraid to use the infamous auto-tuned syncs and vocals he is known for on one track and switch up his style on another song. This can be seen on the songs, “Stop Trying to be God”, “No ByStanders”, and “Carrousel”. In “Stop Trying to be God”, Scott meshes low vocals with live instrumentation and a spaced-out beat to create something not really heard in music. But in songs like “No ByStanders” and “Carrousel” he creates an intense atmosphere that makes someone want to jump around and rage. Overall, despite offering different sounds, the listener is able to appreciate what this album offers.

The features on this album add a lot to it.  At first glance, no song does not have a feature on it. However, Scott may have done this to surprise the listener. When someone sees that someone is featured on a song, they may have certain expectations on how that song should sound.  But by adding no features, he surprises his listeners. Scott recruits the likes of Frank Ocean, Drake, Swae Lee, Gunna, Nav, 21 Savage, Juice World, Sheck Wes, The Weeknd, and Stevie Wonder for his album. He is able to take what each of these artists do best and fuses it with his own style to create dope music.

AstroWorld shows off how talented Travis Scott is and how he lives up to the hype. The album has a diverse sound and he is able to bring some of the best artists in the music scene together to make the best music.

I'm a just lover of hip-hop and photography who grew up in Ajax Ontario. Through this platform I hope to share my opinion on the world of rap and bring a new perspective to new upcoming acts, artist, and the music scene. In addition to being a lover of hip-hop, I love to capture photos of these artist in the mean while.
RELATED ARTICLES
album reviewalbum reviewsastroworld
8.0