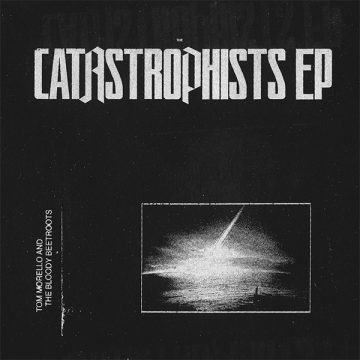 Following the release of his 2020 solo EP, Comandante, Tom Morello has reunited with electronic outfit, The Bloody Beetroots for a collaborative release, The Catastrophists EP. The two have previously worked together on the 2020 single, “Stand Up”, which also featured Shea Diamond and Dan Reynolds. Furthermore, despite releasing numerous singles over the years, this also marks the first major release from The Bloody Beetroots since their 2019 EP, Heavy.

The Catastrophists EP opens with the overdriven feedback from an amp, with Morello’s bellowing vocals reciting a spoken word anthem as the guitars and synths slowly build under his powerfully haunting and gravelly voice, echoing with a tone reminiscent to the menacing strength of Johnny Cash himself. “The Devil’s Infantry” abruptly erupts into a riff fueled breakdown, set over synthy bass drops and other electronic textures. The strong introduction of “The Devil’s Infantry” is countered with the melodic “Lightning Over Mexico”, sung by The Bloody Beetroots and driven largely by electronic beats that are enhanced by the sporadic use of Morello’s guitars which make the electronic song sound absolutely massive.

The album continues with the recent single, “Radium Girls”, an explosive banger accented by the contrast between glossy vocals and a catchy chorus and Morello’s screaming guitar. Featuring Pussy Riot, Aimee Interrupter (The Interrupters), Mish Way (White Lung), and The Last International trading vocals, “Radium Girls” is a definite highlight on the EP as perhaps the strongest and most exciting track. Similarly, “Weather Strike”, a collaborative track between Morello and Pussy Riot released earlier this year, is remixed by The Bloody Beetroots and shines for its juxtaposition between a sickly sweet and electronic verse and a hard-hitting chorus. Additionally, “Keep Going” builds on the Johnny Cash vibe with a haunting acoustic song while “Mary Celeste” builds on the songwriting strengths of both The Bloody Beetroots and Morello in what is the most intricately collaborative track with a punchy riff, tasteful and unique electronic elements, a rhythmic acoustic guitar, harmonized vocals, and a soaring guitar solo. The song brings The Catastrophists EP to an incredible close with a fully realized vision as to the depths of what this collaboration could achieve.

As Morello digs deeper into this creative journey which began on his 2018 solo album, The Atlas Underground, his ability to write and record with electronic artists is only getting stronger. The Catastrophists EP is a refined synthesis between Morello and The Bloody Beetroots that shines as both a unique electronic and alternative rock album. With highs as great as “Radium Girls” and “Mary Celeste”, The Catastrophists EP is perhaps the strongest of Morello’s recent collaborations and should leave listeners excited for what is to come next.

A passion for music has always been a part of Gerrod’s life. As a young boy, he was raised on a steady diet of the music from The Chili Peppers, Aerosmith, The Stones, Prince, and others from his mum. Raised in the GTA, Gerrod continued to foster his love for music by attending a wide range of concerts and learning the drums. His unapologetic passion for music has no bounds and has spread to a wide variety of styles, whether it be the 90’s rock that sound tracked his teenage years, the jazz he studied in university, or his newfound love for hip-hop. He recently received his bachelors in music and education from York University and is passionate about writing and reviewing good (and less than good) music. Gerrod is also the drummer and songwriter for a Toronto based rock & roll band, One In The Chamber.
RELATED ARTICLES
album reviewalbum reviewsradium girls
8.0