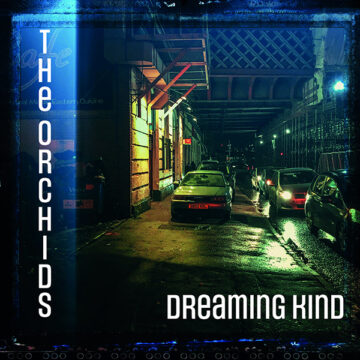 Coming back with their first release since 2015, the Glasgow band The Orchids present Dreaming Kind, 13 tracks of intricate, groovy indie pop centered around ideas of romantic futility, unintended miscommunication, and the confused heartbreak that comes when two people realize they might never get on the same page.

Opener “Didn’t We Love You” is a bright, energetic track with rangy, rolling guitar and “Limitless #1 (Joy)” is a buoyant follow-up, revealing an early strength of this album, which is the smoothness with which one track yields to the next. “What Have I Got to Do” opens with a rise of crystalline strings, almost like bells, Hackett singing “what have I got to do to make you love/now I’m on my knees, would you take a look at me?”, lines that encapsulate the album’s recurrent themes of a speaker perpetually feeling half-heard, half-understood and confused about how to move forward. The strongest track, and the best example of the album’s stylistic variation, is heading into “I Never Thought I Was Clever” with its dramatic opening guitar a juxtaposition against the first four tracks before it, but which turns sunnier by the end, attaining the chill vocal grooviness of a band like Real Estate. Later in the album, on a track like “I Don’t Mean to Stare”, which opens with ghostly recorded dialogue, there are artful touches of horn that accompany the bouncing, slap-drum melody that underpins the whole track, Hackett singing “Didn’t I, didn’t I see the love in your eyes?” in yet another reference to the sense of uncertainty and confusion that runs through most of these tracks. The last two tracks seem to work towards a resolution, the penultimate track “I Want You I Need You” forthright and confessional, Hackett singing “I don’t know why I got a feeling it will all work out/it seems to me there’s more to life than we’ll ever need” followed by the conclusion offered in “Limitless #2 (Hurt)” which slows way down, melancholy with rejection, Hackett stretching out each word, singing “I never thought you could be/as cruel as you are to me/all the words you used to use/that got me all so confused/I’m used to” lines that provide some element of closure to the album.

It’s worth remembering that The Orchids have been making music for several decades now, with their earliest work arriving in the late 80s, and there are moments throughout the album where it’s still possible, with the synths and the guitar work, to invoke bands like R.E.M and The Smiths if they had poppier, more structured lyrics. In the end, this is polished, cheerful, well-produced music by a band that’s been doing it that way for a long time, and a worthy addition to a wide-ranging career together.

Dan Kennard is an English teacher and fiction writer living outside Kansas City, Kansas where he lives with his wife and children. More about his work can be found at amazon.com/author/dankennard. You can also follow him on Twitter and Instagram @kennardistry or contact him at [email protected]
RELATED ARTICLES
album reviewalbum reviewsskep wax
8.0