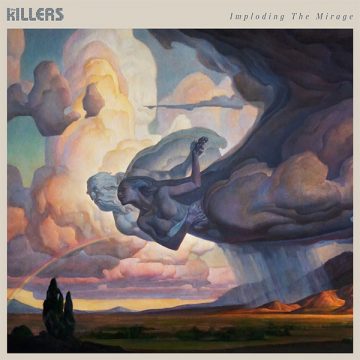 The highly anticipated sixth studio album by The Killers titledImploding The Mirage was recorded in Las Vegas, Los Angeles, and Park City Utah, where lead vocalist and writer Brandon Flowers has recently relocated his family. Produced by the band along with Shawn Everett and Jonathan Rado of Foxygen, the album is somewhat of a reinvention musically for the band, as 2017’s Wonderful Wonderful, was filled with love songs written for his wife who was suffering from depression. Imploding The Mirage represents moving from dark to light, and to celebration from depression. The album also features a list of guest artists that includes Lindsey Buckingham, D. Laing, Adam Granduciel, War On Drugs’ Wayes Blood, Blake Mills, and Lucius.

The album opens with the anthemic “My Own Soul’s Warning”, an upbeat track that launches the 10-song set nicely, and in which Flowers vocal shines. “Blowback” starts off with an easy rocking beat, and contains an infectious and haunting guitar solo. “Dying Breed” starts off with a stripped-down bottom end (bass and drums) for the first 30 seconds, before Flowers’ vocals kick in, and the song turns into an emotional chugging train, “Baby We’re A Dying Breed”. The anthemic advance first single “Caution”, featuring a guitar solo by Lindsey Buckingham, has been a staple of pop radio all summer long, and is synonymous with the sound that has made the band so successful. The Killers had planned a worldwide stadium tour in support of Imploding The Mirage, and had sold more than 350,000 tickets within hours of them going on sale, including two sold out shows in the UK at London’s 55,000-seat Emirates Stadium. However, ticket buyers will have to wait until at least 2021 to see the band live.

“Lightning Fields” is a duet featuring K.D.Laing and Flowers, although it doesn’t sound like a usual Killers song, with its many identifying signposts. The pairing of two great singers and a  decent song usually makes for a winning combination. “Fire In Bone sounds vaguely reminiscent of David Byrne and Talking Heads, as Flowers dramatically sings, “After all I took from you/After all I put you through“. “Running Toward A Place”, and the ballad that follows it, “My God”, aren’t particularly inspiring. However, the album returns to solid ground with the final two cuts, the synth-driven “When The Dreams Run Dry” and the title cut, “Imploding The Mirage”.

Overall, a solid release, and it’s already been widely reported that the prolific Flowers has already written 50 new songs for The Killers’ next album set for release in June of 2021.

Gerry Young is President of Current Records and Management, and author of the 2011 biography Pop Goes The Weasel: Rock And Roll Off The Record, available at Indigo/Chapters, Barnes & Noble, and Amazon.com. He has recorded and managed Juno Award winning bands Martha And The Muffins and The Parachute Club among others.
RELATED ARTICLES
album reviewalbum reviewsimploding the mirage
7.0