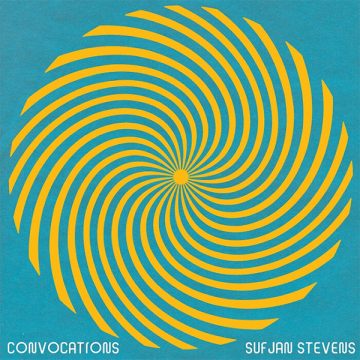 Sufjan Stevens never does the expected, never has, and no doubt never will. Following the success of his 2020 release The Ascension, he has followed it up with a five-album box set titled Convocations. Although Convocations is also an instrumental album, like previous release Aporia, it is very different.

Convocations is about loss, specifically the loss of Stevens’ father, who passed away two days following the release of The Ascension. It also touches on anxiety, uncertainty, and isolation There are 49 songs here, spread over five discs. Each album represents a stage of grief. It is clear that Stevens sees the healing power of music, as he did something similar when his mother passed away (2015’s Carrie And Lowell). Here, however, Stevens lets the music tell the story. A very heavy topic, and yet heavy theme does not detract from the musicality of the album and the beauty that Stevens creates.

Stevens uses a variety of instruments throughout the album. This is not a standard ambient album, but rather a musical exploration. Each disc or section has its own distinct title and musical sense. The set starts with “Meditations”, and then moves on to “Lamentations”, “Revelations”, “Celebrations” and finally “Incantations”. Each section is divided into pieces, such as “Meditation I” and so on. Unlike the music he has composed for ballet, this music is not purely classical. It drifts from classical to ambient to experimental and all points in between. But, Stevens has a keen ear for melody, so the albums are melodic and at times chaotic but underneath everything is a clever musical sense.

At times the music is frightening, such as “Meditation V”, where he layers sound and it leaves one with a rather unsettled feeling. “Incantation II” has a similar impact. Much like being told the news of the death of a loved one. Whereas “Revelation IX”  is almost in panic mode. “Celebration” does not sound like a celebratory section, but underneath the melancholy there is a sense of celebrating survival. He successfully brings it a remarkably beautiful ending with “Incantation IX”. “Incantation being the only section that does not have ten pieces.

It is a long album full of a great deal of information, five albums worth, but it never gets tedious or boring. Many of the songs clock in under two minutes, and those that are longer seldom go much past four minutes. This makes for a diverse, interesting listening experience. Each track connects to the next, yet they are all different. In fact, several of the songs change drastically from start to finish.

Convocations is a serious work and well worth the time invested listening to it. It may not be Sufjan’s best work or even his most adventurous, but it is a bold statement. He is an artist who delivers consistently strong  work. He will not be pigeonholed, which may lose him some fans, but I am not sure constant top ten albums is his goal.