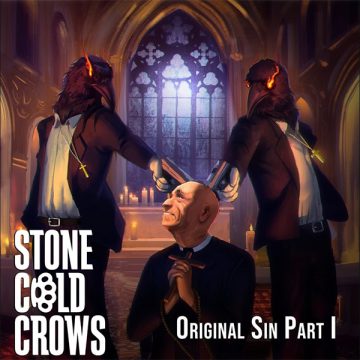 Perhaps the coolest musical project to emerge out of Ontario over the last year is Stone Cold Crows, from vocalist and guitarist Mitch Cuming and drummer Bryson Emmons. The two have released a handful of singles – “Before The Devil Knows We’re Dead”, “When The Thunder Comes”, and “Ghost In A Bottle” – all culminating with their full-length debut album, Original Sin Pt. I, a truly cinematic, rock ‘n’ roll listening experience unparalleled by their contemporaries.

Original Sin Pt. I opens with “System Breach”, a thematic and instrumental build up that develops a sense of atmosphere before diving into “Brave New 84”. In this sense, “System Breach” is a prelude before the true opening track, a song that sounds as if Alice Cooper was backed by a symphony orchestra. The combination between hard rock songwriting, along with elements of ‘80s metal – think Metallica’s “One” – and classical instrumentation is not new, but it is the core of Stone Cold Crows’ sound; something that you could say for few in general, let alone on their debut album. The result is organic, sublime, sophisticated, and simply riveting.

With eight tracks, Stone Cold Crows establish themselves as masters of their craft. On top of their impressive use of ornamentation and orchestration, Emmons’ drums are monstrous while Cuming shreds on the guitar and rips vocal melodies that sound as if he called Cooper himself into the booth – honestly, this could stand as one of the most impressive Alice Cooper records. As a band, they’re as tight as they come. Without a weak moment on the album, the hard-hitting “The Beast I Am”, the cinematic, southern rocker – and initial single – “Before The Devil Knows We’re Dead”, the anthemic “When The Thunder Comes”, and the epic, larger than life album closer, “The Last Of Us” stand as genuine highlights that you must hear.

Original Sin Pt. I very well may be the most ambitious debut album I’ve heard in the last decade. Rather than crumble under the weight of their lofty goals, Stone Cold Crows soar through a blistering record that demonstrates a rich level of musicality as both recording artists and songwriters. Simply put, no one else is making a record like Original Sin Pt. I, and if they were, it certainly wouldn’t sound half as good. Without a doubt, Stone Cold Crows has delivered an incredibly strong debut that should be considered among the top rock records of the year.