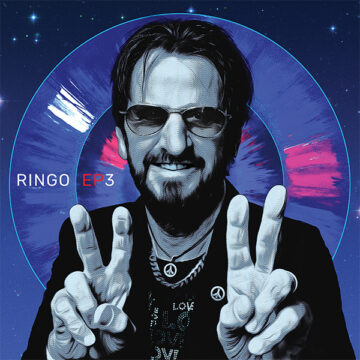 It may be hard to believe, but since The Beatles called it a day in 1970, Ringo Starr has released 20 studio albums and 11 live albums. This is quite an accomplishment for the member of the band that few had positive expectations of him sustaining a solo career. Yet, he has also toured more than any of the four Beatles (he is currently on tour at the time of this writing). And, for the most part, these have been incredibly successful. As brilliant as his albums are, it is his non album singles and B-sides that stand out, “It Don’t Come Easy”, “Back Off Boogaloo”, “Down And Out”, and “Just A Dream” to name a few. So, it was interesting when Starr announced, in 2021, that he was only going to release EPs and not complete albums, and he has made good on his promise. He has released Zoom In, Change The World, and now EP3.

Unlike the first two EPs and his last six albums, Starr contributes only one song that he wrote. While he does not cover classic rock ‘n’ roll hits (such as “Rock Around The Clock” on Change The World), he does rely on fellow All-Starr members, long time collaborators and a famed Los Angeles writer. In the end, however, all the songs get the Starr treatment, and once again Starr delivers a very upbeat, positive, strong rock EP.

EP3 kicks off with “World Go Round,” written by All-Starr member Steve Lukather and fellow Toto member, Joseph Williams, who both provide guitar and keyboards (respectively) and backing vocals. This is straight ahead rock, which would play perfectly on classic rock stations. Starr’s voice is in fine form, and lyrically it is a message of peace and understanding. This is followed by “Everyone And Everything”, written by former 4 Non Blondes member, Linda Perry (who is best known for writing Pink’s “Get This Party Started” and Christine Aguilera’s “Beautiful”). This is tailor made for Starr with Perry backing him up, it is both melodic and lyrically very strong. Starr’s drumming is front and centre, and he plays off Billy Mohler’s bass. It is a strong track and would have made an ideal single.

Longtime collaborator, and engineer Bruce Sugar., with help from Sam Hollander, comes up with a more dance-oriented song. The song features some strong guitar work from Lukather, and the song is pure energy. Starr’s vocals have never sounded better and he sounds like he is having the time of his life with the song. The closing track, the strongest of the set, “Free Your Soul” mixes Latin rhythms with a Sade vibe. And it works. Saxophonist Dave Koz provides emotional and beautiful solos, while José Antonio Rodríguez plays superb Spanish guitar.

Even though there are a number of writers and musicians contributing to EP3, Starr has managed to come up with a cohesive, consistently strong set of songs. The truth is that EP3 is not that different from the other two EPs, and in fact the 13 songs together would produce one his strongest albums of his career. In producing EPs, however, Starr has become extremely selective of the material. There is no filler, just excellent music. Each song emits Starr’s peace stance and the songs musically and lyrically fit together. Listening to this new music, it is somewhat hard to believe that Starr just turned 82 this summer, as he shows no signs of slowing down. If anything, Starr still has a great deal to say, and record.

Born and raised in Whitby, Aaron discovered music through his love of The Beatles. This led to a career in radio, writing for various publications, and ultimately a radio show about The Beatles (Beatles Universe), which ran for over four years. When not immersed in music, Aaron enjoys spending time with the loves of his life -- his wife Andrea, and daughters Emily and Linda (all of whom have an intense love of music too).
RELATED ARTICLES
album reviewalbum reviewsringo starr
8.0