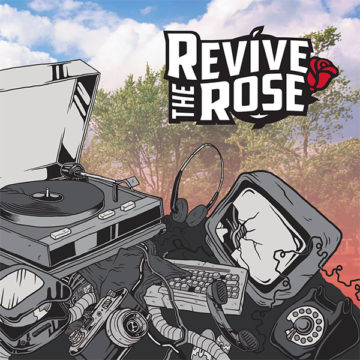 If you haven’t heard of Revive the Rose yet, you’re certainly about to. Not only has the Welland, Ontario-based rock band been sharing the stage with the likes of Monster Truck, Danko Jones, The Glorious Sons, and Quiet Riot, among many others, on stages across Ontario, but the Rocksearch 2016 finalists have just released their debut full-length, self-titled record! Revive the Rose is made up of brand-new material, along with singles released in the past year, and newly recorded versions of their older work. Ultimately, Revive the Rose is an album that will turn heads as it sets the bar high for both the band and the local Ontario music scene.

Opening with the swelling guitars and crunching riffs of “Moxie” and Andy Colonico’s powerful lead vocals – still sounding reminiscent of an aggressive Dave Grohl – Revive the Rose kicks in the door with a thunderous sound. While the following track, “Rebound” which was released earlier this year along with a music video, takes a slightly more melodic approach, the song builds to gain just as much momentum as the opener. Between these two tracks, Revive the Rose’s style is very much solidified as a hard rock band with a punk energy and a slight ‘90s rock edge.

Track after track, Revive the Rose continues to deliver hard-hitting, larger than life rock songs that are as well-produced as the songs are written. Where “Welland’s Finest” brings all the weight of AC/DC, “Bar Down” has all the qualities to be a modern rock anthem that will be sung back at the band by sold-out concert halls. Revive the Rose have clearly dug deep into their rock roots for their self-titled album. That being said, while the previous two tracks make a strong case for the best work across Revive the Rose, my favourite track is the gritty, swaggering “Come A Little Closer”. Not only does the song hit hard, but it takes a strong left turn with a risky and completely unexpected chorus which successfully takes the song to a whole new level in both performance and songwriting.

Front to back, Revive the Rose absolutely rips. This is a band that has tirelessly and consistently pushed itself over the years; not only does the album reflect that, but it feels like a long time coming. This is a band that has hustled hard to get where they are, and now, they can reap the rewards that are Revive the Rose. Without a doubt, this is an album that you must hear as you check out one of Ontario’s – and perhaps Canada’s – most premier, up-and-coming bands as they continue to make bigger waves.

A passion for music has always been a part of Gerrod’s life. As a young boy, he was raised on a steady diet of the music from The Chili Peppers, Aerosmith, The Stones, Prince, and others from his mum. Raised in the GTA, Gerrod continued to foster his love for music by attending a wide range of concerts and learning the drums. His unapologetic passion for music has no bounds and has spread to a wide variety of styles, whether it be the 90’s rock that sound tracked his teenage years, the jazz he studied in university, or his newfound love for hip-hop. He recently received his bachelors in music and education from York University and is passionate about writing and reviewing good (and less than good) music. Gerrod is also the drummer and songwriter for a Toronto based rock & roll band, One In The Chamber.
RELATED ARTICLES
album reviewalbum reviewsrebound
8.0