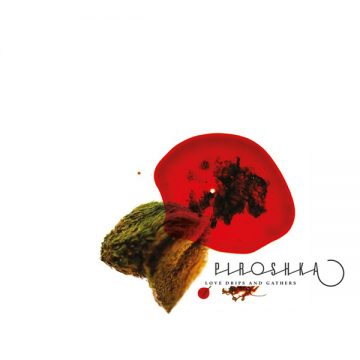 Bob Mould now-famously excused himself in 1993 from producing London shoegaze/dream pop band Lush’s album Split because he “kept picking the wrong girl’s songs.” The novel template of Shangri-Las/ABBA vocal harmonies, the energy of The Ramones, and the atmospherics of Cocteau Twins capitalized on the contrasts between guitarists Miki Berenyi and Emma Anderson. Mould tactfully kept mum about whose songwriting he favored, but Berenyi’s share of it on Love Drips And Gathers, the second album by her post-Lush project, Piroshka, won’t help to confirm either way.

“Hastings 1973” awkwardly drops the listener into the middle of a scene with no context, a sudden blind date where the couple is pressured to hold hands. Not enough narrative clues and too incomplete to naturally induce sentimentality, the pre-emptive expectation of such is signaled by the wistful mellotron closing the track. It communicates nostalgia, but it feels icky. The best song here is second single “V.O.”, a shimmering mirage that transports to an exact place and time in memory, never to be repeated in deed or speech. This lost Lush, Piroshka prequel is a groovy tune that gets everything right precisely because the details are few.

Piroshka’s debut, Brickbat, hinted at the band’s expansive potential, and every song on Love Drips represents a new direction. Unfortunately, the production is designed to overwhelm with obviousness and engineered emotion while the performance is too precise and squeaky-clean—like a Library of Congress recording with no room-sound or ambient microphones. Colorful accents like vibraphone, wood block, and string flourishes supply plenty of interest, but the main ingredients of guitar, bass, and drums are bland, sterile, and bled of all personality.

With layered cello, bright piano accents, and dreamy keyboard washes, “The Knife Thrower’s Daughter” is resplendent with pleasant noises. Berenyi’s vocals are strong and enunciated, but this attempt at directness would have been more impactful if some lyrical clues brought everyone in on the joke. First lines like, “Did your house have lions?/ Did your house have mice?” do not. We almost know that she’s talking to a kid. The mood of fantastical, childlike suspense builds with a melodramatic segue into “Scratching At The Lid.” This song is tricked out with more gimmicks than a Sammy Hagar single. With lyrics drenched in Hagar’s Van Halen-era optimism, its strict mandate of positivity compiles a sermon of all the usual advice for living life without regrets—except for a reminder never to let perfect get in the way of good.

Charles T. Stokes is a nonprofit resource development coordinator and donor researcher based in Denver, USA. He’s also a tennis player and writer looking to make a racket with his own noises. “There are places in the world where one cannot publicly listen to or perform whatever music they choose without fear of harassment or prosecution. The freedom to write about new music is power, a privilege.”
RELATED ARTICLES
album reviewalbum reviewsbella union
8.0