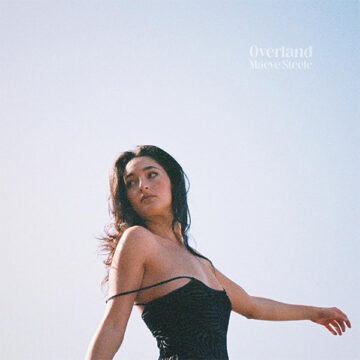 The number of artists doing their music the way they want is growing exponentially, which makes it exponentially hard for them to reach a wider audience, without something to make them stand out. Very often, even if the music is very good to exceptional that problem just might persist.

Listening to Overland the 5-song EP by LA-based artist Maeve Steele, you can notice all of the above attributes; some really well-crafted songs with excellent melody lines and vocals with deep trip hop and shoegaze overtones.

It all just might go unnoticed, but what might catch the attention of potential listeners is the involvement here of the multi-platinum producer/mixer/engineer Brian Malouf (Michael Jackson, Madonna).

Of course, a producer of such a calibre doesn’t get involved with projects of what the PR people call ‘rising’ artists if they don’t hear some serious potential, no matter what kind of money is involved with such a project.

And Steele is not just oozing with potential, she already sounds like a fully-formed pop singer/songwriter that knows exactly what she’s doing and that will go far and quickly at that.

Formerly a lot of things, including a journalist and a translator, currently a freelance writer living in The Netherlands.
RELATED ARTICLES
album reviewalbum reviewsriptide
8.0