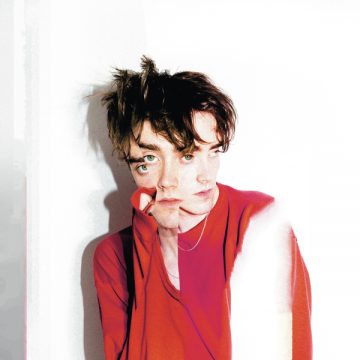 After two triumphant LP’s as frontman for the indie outfit out of Minneapolis, Hippo Campus’s Jake Luppen is now launching his own solo career under the name Lupin. His self-titled debut is beautiful in a bizarre way –you will seldom find an album with more sounds and feelings. Lupin is jam-packed with outlandish synth tones, electrifying percussion, and of course Luppen’s signature eccentric vocals.

Lupin begins with a painfully honest evaluation of a deteriorating relationship in “Harbor”. Right off the bat, listeners are introduced to one of the many unorthodox auto-tuned vocals used here, paired with an almost outer space-like synth sound. “Vampire” returns back to earth for an examination of a seemingly phony connection with someone. Immediately, a heavily modulated synth hook is laid down and paired with one of the more unfiltered vocals heard on the record.

“Murderer” is at some moments a sweet ode to a significant other who he had once failed in a relationship, and at other moments a sad realization that he is fading from their memory. It is beautiful, groovy, and honest. “May” was the lead single for Lupin and is a track that is undeniably influenced by the late, fellow Minneapolis native and hometown hero, Prince. Powered by a fabulous bassline, intoxicating 808 drums, and a ludicrous display of Luppen’s falsetto, “May” is a blast.

Lupin’s transparency of relationship insecurities coupled with the hundreds of stimulating sounds you hear throughout the album make for an outstanding debut for Jake Luppen’s solo career. This record is brutally honest lyrically, and has been masterfully engineered by producer BJ Burton (Bon Iver, Low, Charlie XCX). Lupin is a must-listen record for those who seek a sonic adventure.