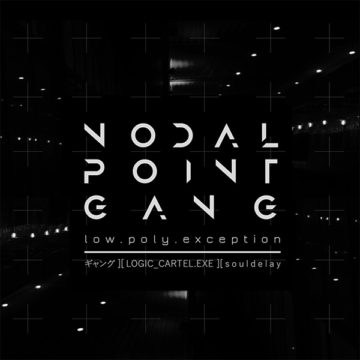 The album delivers an eclectic blend of self-produced electronica, opening with a catchy, Kraftwerk-esque “Warehouse Uplink.” I liked the exploration of synth and melody to create a smooth, percolating texture. “Nanocarbon Shrine” is reminiscent of a Kraftwerk lullaby for me (the band cites Ryuichi Sakamot, Kenji Kawai, Ed Harrison, Android Lust, Diamondstein and Buck-Tick as influences) with hits of dark synth. The melodic synth stabs are juxtaposed with a bell-synth melody that hints at Dead Can Dance, UK new wave and Nine Inch Nails for me. Clearly tags like cyberpunk and synthwave fit the album so far. By track four, “Disposable Tantõ’s” melancholic Rhodes melody gives way to a faster, more jungle inspired rhythm. Quicker tempos remain for the rest of Nodal Point Gang, honouring the cyberpunk aesthetic. I respect the build from the first three tracks to a quicker departure for a heavier rest of the album but I’d like to hear more of low.poly.exception’s slower intro tracks.

As it stands, the moody opening tracks of Nodal Point Gang are perfect for a dark November day or as a sonic backdrop to help focus on getting work done. The faster tracks provide a soundtrack for moving around a fast-paced city draped in melancholia.

low.poly.exception demonstrates excellence in composition and rhythm, even though the faster tracks were not for me. “Monaofilament Array,” the final track, recalls some of the opening synth melodies.

At only $3 for a digital download, I recommend Nodal Point Gang. Full length CD is an affordable $10 CAD.

Talia Wooldridge is an avid music lover, composer and ethnomusicologist who contributes artist interviews, live concerts, festivals and album reviews for Spill Magazine. She has written extensively on the intersection of music, personal identity and cultural symbolism with an early focus on Latin American Hip Hop and female Cuban rappers. In her spare time, Talia writes, composes music and manages Music Can Heal, a non-profit that brings live, award-winning musicians to inspire healing in hospitals, hospices and communities in need. Her next project is an interactive music-travelogue exploring music cultures and music travel around the globe. Follow her here: www.taliawooldridge.com + www.movetoyourownbeat.com.
RELATED ARTICLES
album reviews
8.0