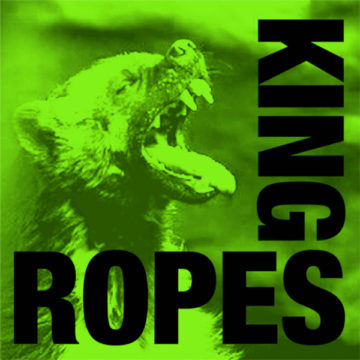 Most modern rock is inoffensive, for better or for worse. Bands like Wilco, Franz Ferdinand, and Cold War Kids trade the angst of the ’90s and the chauvinism of the ’80s for more introspective and philosophical approaches to songwriting. King Ropes’ latest release Green Wolverine is no exception. The four songs which make up Green Wolverine are quirky and clearly personal, including the track “I Am A Cinematographer” which is a Palace Brothers’ cover. King Ropes’ singer, guitarist, and brainchild, Dave Hollier, shares his soul on this album and does so over beautiful, ambient tones. While King Ropes falls short occasionally in getting a strong message across, Green Wolverine is a very concise and listenable record.

The charm of modern genres like post-rock or indie comes from their intent. The goal of these genres is not to indulge history or show technical proficiency but to make noises people want to hear with the available technologies. Reverb, delay, chorus, and other effects are used to create dynamics which are enjoyable to the ear. King Ropes does just this on Green Wolverine. Each track has multiple layers to it with “I Am A Cinematographer,” being the best example. The lead and rhythm guitar are both soaking wet with different effects which complement each other well. On “Dogeard” the ambient and sometimes dissonant guitar which sits comfortably low in the mix sets a melancholy mood which is felt through the entire song. Hollier’s voice serves his songs well too. His often nasally approach to singing gives the song a touch of Primus which helps offset the Explosions In The Sky mood. It’s a nice touch which gives the songs some extra personality and helps King Ropes stand out within the genre.

There are some aspects of Green Wolverine which jar the listener out of the flow of the music. “I Am A Cinematographer” starts off by repeating the title of the song four times which could be seen as lazy writing. As Charles Bukowski said about writing, “each line must be full of a delicious little juice, flavor, they must be full of power,” and such repetition right off the bat really hebetates Hollier’s lyrics. The song “Road To Ruin” is certainly a low point on the album. The tune drags along throughout its entirety and the vocal effects used when Hollier says the “France” is incredibly cringeworthy. It sounds like they recorded the caretaker from Scary Movie 2 saying it with a delay that starts way too early.

Overall, King Ropes’ Green Wolverine is worth a listen. With only four songs it fits in with today’s generation which lacks an attention span. The music is calming and interesting, with multiple play throughs the listener will discover new aspects of the songs. Such is the nature of ambient music and Green Wolverine is no exception. Dave Hollier has obviously had some unique experiences in his life and if he goes on to describe them in new ways in the future he may be able to produce an absolute gem of an album.