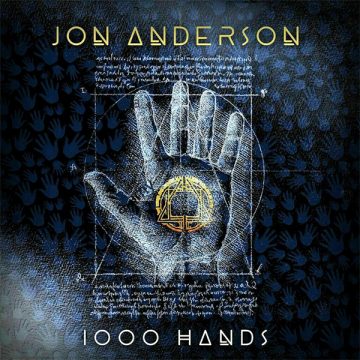 Jon Anderson has one one of the most distinct and recognizable voices in rock history. His voice can be heard on some of the best music made in the last 50 plus years, whether it is with Yes, or Jon And Vangelis, or Anderson and Wakeman, or his own solo efforts. Jon Anderson is a true original and a brilliant artist. 1000 Hands is his most recent solo album, his first studio album since 2011’s Survival and Other Stories. It is an album that Anderson has always wanted to make, and in fact he has been working on this album for 28 years.

The album, 1000 Hands, was actually released in March, 2019 for digital download and a very limited vinyl release. That album, 1000 Hands: Chapter One did not receive the attention it deserved and left many fans disappointed due to its lack of availability. Now, it is being re-released in 2020 for the world to enjoy.

From the opening note of the wonderful introduction “Now”, you know what you are in for a moving, loving album, with a roster chock full of expert musicians, and that dynamic vocal. The album is not all one style, but instead a hybrid of many sounds/genres coming at the listener. “Ramalama” is pure Anderson, layered vocals and no instruments until it almost reaches the one minute mark. Melodic, playful and downright magnificent. The album moves on from there.

One of the reasons the album is so dynamic is due producer Michael Franklin. A musician in his own right, he has been able to take his musical knowledge from over the years and use it to get the absolute best from Anderson. Franklin and Anderson also enlist some friends, who happen to be some of the best and most respected musicians making music today. Jean-Luc Ponty, Ian Anderson,  Chick Corea, Steve Morse, and old Yes bandmates, Chris Squire, Alan White, and Steve Howe.

The music is a mixture of world music, pop, rock and prog rock, and the overall theme is love. Almost every song expresses love and appreciation, and what a wonderful sentiment that is today. It all comes together at the end with the best track on the album, “Now And Again”. It sums the entire album up and is the best possible way to end.

1000 Hands is a great album. Although it has taken a long time to get here, one does not get the sense that it has been anything but sheer pleasure to create and present to the world. It is full of strong melodies, no matter what genre you wish to call it, and top of the line singing and musicianship.

Born and raised in Whitby, Aaron discovered music through his love of The Beatles. This led to a career in radio, writing for various publications, and ultimately a radio show about The Beatles (Beatles Universe), which ran for over four years. When not immersed in music, Aaron enjoys spending time with the loves of his life -- his wife Andrea, and daughters Emily and Linda (all of whom have an intense love of music too).
RELATED ARTICLES
album reviewalbum reviewsyes
9.0

by Aaron Badgley on September 25, 2020
Sufjan Stevens The Ascension Asthmatic Kitty It is hard to believe, but it has been five years since Sufjan Stevens released a ‘conventional’ studio album. That doesn’t mean he has [...]
9.0