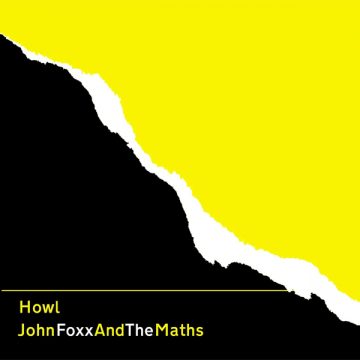 John Foxx returns with The Maths, a band he has created with Benge (Blancmange, Fader, John Grant, to name just a few of the artists with whom Benge has worked). Since their debut album in 2011(Interplay) John Foxx and The Maths have continued to grow and explore with their sound. Howl, their fifth studio album, continues on this path and is their strongest album to date.

Joining Foxx and Benge for this album is longtime collaborator Hannah Peel, and Foxx’s old friend Robin Simon of Ultravox.  Their presence is felt and welcomed to the overall sound. Peel has always provided atmosphere, but on Howl, she provides some of the most aggressive and experimental violin I have heard in the past decade and it fits the overall mood of the album.

Howl is Foxx returning to sounds he has not produced in a few years. The album, for the most part, is an angry album that reflects the time. The album title itself suggests that Foxx and company are not pleased with what they are seeing in the world and they are not going to go quietly. “Howl” and “Everything Is Happening At The Same Time” are just two examples of this. Synths mix with guitars and violins, and Foxx’s vocals are effective throughout.

Although musically the songs have an overall aggressive feel, they are not devoid of melody. “My Ghost” is an example of the strong melodies one finds throughout, which enter your consciousness and take hold. From beginning to end, every song has its own distinct soundQ”, and every track is a winner.

Lyrically, it is Foxx at his best. With Howl, he uses imagery and other techniques to get across his points of view. “New York Times” and “Tarzan And Jane Regained” showcase some of his magnificent lyrics.

Welcome back John Foxx and the Maths.

SPILL FEATURE: READY TO HOWL AGAIN – A CONVERSATION WITH JOHN FOXX (JOHN FOXX AND THE MATHS/EX-ULTRAVOX)

Born and raised in Whitby, Aaron discovered music through his love of The Beatles. This led to a career in radio, writing for various publications, and ultimately a radio show about The Beatles (Beatles Universe), which ran for over four years. When not immersed in music, Aaron enjoys spending time with the loves of his life -- his wife Andrea, and daughters Emily and Linda (all of whom have an intense love of music too).
RELATED ARTICLES
album reviewalbum reviewsbenge
7.0