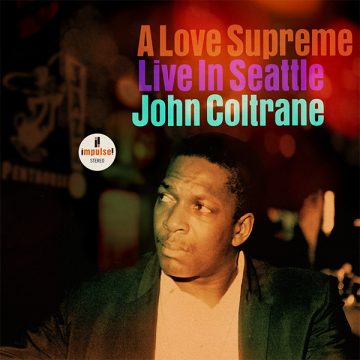 A Love Supreme is truly a life-changing album. Originally released in 1965, the classic jazz album remains as John Coltrane’s opus; a timeless classic of a musical genius at his songwriting and performing pinnacle, while also cementing John Coltrane Quartet. The band consists of Elvin Jones, Jimmy Garrison, and McCoy Tyner and is one of the greatest ensembles in the jazz pantheon and beyond. While the album has been expanded over the years through various reissues, the latest offering comes in the shape of a recently discovered set of live tapes from Seattle at the tail end of 1965 and features additional musicians Pharoah Sanders and Donald Garrett in the fold. The resulting A Love Supreme: Live In Seattle is a remarkable live performance that not only lives up to its era, but also furthers the legacy of Coltrane and A Love Supreme.

Opening with “Pt. I – Acknowledgement”, A Love Supreme: Live In Seattle slowly builds with a trance inducing introduction as the band slowly comes in, growing in both volume and intracity of playing. The intro stretches for TIME of the 22-min track, demonstrating a sense of sophistication and restraint amongst a band well-steeped in one another’s playing, all the while building a sense of tension and suspense among the audience. By the time the band is at its full force, Coltrane’s saxophone is wailing and weaving together a cacophony of notes in a manner only he could. “Pt. I – Acknowledgement” could very well fall apart at any given second, and yet the band soar through a rhythmic and harmonic gauntlet, before winding down in a manner to how they opened the song with a long decrescendo. This is not smooth jazz, and Coltrane and the expanded quartet are far beyond bebop; this is simply a relentless masterclass in sonic performance and complete independence within a collective.

While separated by a series of interludes, each of which further demonstrates the performing force of this ensemble – Garrison and Garrett duet on a dual bass solo on “Interlude”, while “Interlude 2” sees Jones shine behind an impressive drum solo – Coltrane performs through an expanded A Love Supreme in its entirety. “Pt. II – Resolution” feels like a breather from the marathon that was the previous song. Rather than push for the borderline between hard bob and free jazz, “Pt. II – Resolution” revels at a smoother tempo with a more melodic tone. That isn’t to say however that the song is anything short of a jaw dropping performance – in fact, “Pt. II – Resolution” may very well be the strongest song on the album – rather it is simply a touch more palatable in style. Additionally, Coltrane’s solo on “Pt. II – Resolution” is truly climatic as it reaches jaw dropping heights. Similarly, “Pt. III – Pursuance” is driven by a subtle but pulsating groove and features a standout piano solo from Tyner while “Pt. IV – Psalm” is a stirring and exciting closer that brings A Love Supreme: Live In Seattle to an elegant and stunning conclusion.

In a mere eight songs, a little over an hour and fifteen minutes, the brilliance of Coltrane and his band is established beyond a doubt. Here, he performs a flawless playthrough of A Love Supreme along with a handful of musical interludes exploding with raw creativity and unbridled musical passion. A Love Supreme: Live In Seattle serves as a fantastic and thrilling snapshot of Coltrane in ’65, post A Love Supreme, but prior to his dive into the avantgarde. Not only does this live album capture a truly special moment in time, but it only serves to further the legacy of Coltrane, his famous quartet, and A Love Supreme. Ultimately, this further asserts Coltrane as one of the greatest, most soulful musicians of any genre to grace the stage.