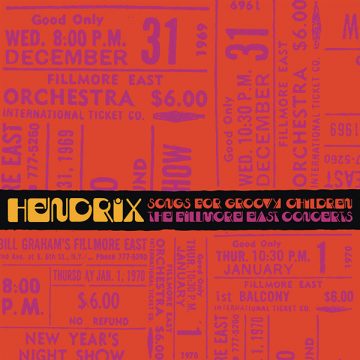 Despite passing away at an untimely age, just under 50 years ago and considering he only really enjoyed a truly extraordinary career that spanned only four years, it is equally shocking as it is amazing that in 2019, there is still unreleased music from Jimi Hendrix. Songs For Groovy Children: The Fillmore East Concerts documents four concerts performed by Hendrix and The Band Of Gypsies at The Fillmore East on New Year’s Eve 1969 and New Year’s Day 1970. What’s more, the box set also includes well over two dozen unreleased tracks making Songs For Groovy Children a true landmark among the vast collection of live material from Hendrix.

From the very beginning, with the emcee introducing the band, you will be hooked as the band dives into “Power Of Soul”. I was immediately impressed with just how immersive the record proved to be from the very get-go, capturing the excitement and thrill of the 1969 New Year’s Eve performance and delivering it today. It goes without saying that Hendrix and the Band Of Gypsies are effortlessly tight – as a band and as individual musicians – however, this being their debut performances, Songs For Groovy Children is especially exciting and captures an incredibly strong debut.

It must also be mentioned that the recordings were mixed and mastered by none other than long-time Hendrix engineer, Eddie Kramer. His work on Songs For Groovy Children is exceptional; not only are all the musicians crystal clear, but their performance is truly electrifying and this stems equally from their performance on the day and Kramer’s work. Without him, Hendrix and co. would still have delivered a great live record, but it is Kramer’s work that puts Songs For Groovy Children a cut above most.

Over the course of 43 tracks, Hendrix blasts through classic material from all sides of his career with a sense of wild abandon. While a number of tracks make multiple appearances throughout the length of the album – “Machine Gun” is performed four times while many others are played at least twice – they all feel new and different from each other as the band indulges in different solos, extended sections, and all-out jams. This is even more impressive when you consider these four concerts were performed over the course of two nights, back to back. These varying performances are especially exciting to listen to and provide a deeper understanding of the musical direction Hendrix would have likely taken over the next few years as he blends rock, psychedelia, funk, soul, and jazz elements together at a level unlike anything before. Front to back, Songs For Groovy Children is full of highlights, but the conclusion of the final concert, including “Voodoo Child (Slight Return)”, “Wild Thing”, “Hey Joe”, and “Purple Haze” is simply jaw-dropping.

Definitively, Songs For Groovy Children: The Fillmore East Concerts stands among not only some of the best live records to come out from Hendrix and his estate, but also among some of the greatest live albums of all time. Hendrix and The Band Of Gypsies’ performance is simply brilliant and overflowing with a level of chemistry and passion that you’d be hard pressed to find elsewhere. Furthermore, despite being recorded half a century ago, Kramer’s mix truly brings the concert to life making it sound, from purely and audio perspective, better than even some live recordings from the last decade. All in all, Songs For Groovy Children: The Fillmore East Concerts captures Hendrix at the upswing of what was perhaps his greatest creative and performing peak, making it an essential collection of music for all. Once again, I am further reminded that if I ever stumbled upon a time machine, my first stop would be any Hendrix performance from the ‘69/’70 era.

A passion for music has always been a part of Gerrod’s life. As a young boy, he was raised on a steady diet of the music from The Chili Peppers, Aerosmith, The Stones, Prince, and others from his mum. Raised in the GTA, Gerrod continued to foster his love for music by attending a wide range of concerts and learning the drums. His unapologetic passion for music has no bounds and has spread to a wide variety of styles, whether it be the 90’s rock that sound tracked his teenage years, the jazz he studied in university, or his newfound love for hip-hop. He recently received his bachelors in music and education from York University and is passionate about writing and reviewing good (and less than good) music. Gerrod is also the drummer and songwriter for a Toronto based rock & roll band, One In The Chamber.
RELATED ARTICLES
album reviewalbum reviewsjimi hendrix
7.0