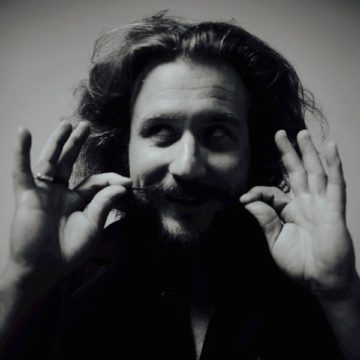 Jim James’ forthcoming solo album Tribute to 2 is the most honest and best collection of songs I’ve heard since Sufjan Steven’s 2015 release Carrie & Lowell. This deep, diverse, and terrifyingly interesting album incorporates covers of songs spanning decades from the ’20s to the ’70s with tunes by heroes of generations past, such as Al Bowlly, Ray Noble, Willie Nelson and Sonny & Cher, to name a few. It’s time to hop in your time machine and prepare to explore far-away, beautiful, and sometimes unsettling places on this unpredictable musical journey.

It is extremely rare to get your hands on an album that is prodigious and brilliant where it’s also clear that the artist is having plenty of fun in the studio with his obscure selections, yet James’ execution on this release is PURE GENIUS.

Opening the album is a cover of Brian Wilson’s song “I Wasn’t Meant For These Times,” an amazing tune that may give you a different impression of what’s ahead on the album. This album goes from ambient creepshow to deep country twang. The depth in musical layers is absolutely fantastic and the production is both simple and effective.

Digging deeper into the record, James sings with an intentional wino slur on the tracks “Midnight, The Stars and You” and “Love is the Sweetest Thing.” If alarmingly eerie was the desired effect on these songs, he surely succeeded. The mood of these recordings gives you the impression that you’ve stepped into a house of horrors in the 1920s with saloon pianos and unsettling characters crooning you into a pure nightmarish state.

One of the album’s highlights is the cover of Willie Nelson’s “Funny How Time Slips Away.” This spooky and cavernous version is depressing, moody, and no singular joke whatsoever. It’s tough to find words to describe its sonic beauty.

If you are longing for some deep and dirty honkytonk, “l’ll Be Your Baby Tonight” will set you straight as James pulls out some HEAVY twang with an inebriated-sounding voice and an old school swingin’ barroom band.

The harmony vocals in the track “Lucky Man” really set the song apart as a hidden gem on the album and brings some aspect of My Morning Jacket into the fold.

Being a newcomer to the world of Jim James’ solo music has opened my eyes to a world of beauty I thought was lost and gone in the music industry. When the depressing and frustrating world of Top 40 FM radio brings you down, just think of Mr. James as a superhero who’s come in to save you.

Andre has been writing for The Spill Magazine for over 12 years, dating back to the print days. His passion for music goes far beyond writing reviews for new music and live concerts, he is also an active musician and producer on the Canadian music scene. Having toured North America and Europe with various acts, he is no stranger to dedication and work ethic new bands must endure to make the grade in today's market; Andre always delivers perspective writing that is authentic and to the point. Mr. Skinner typically covers indie rock, grass roots, electronica and is our resident hard rock and heavy metal specialist. He is extremely selective on what bands he covers for articles and you can rest assured they are ALWAYS band to watch with something left of centre to offer.
RELATED ARTICLES
album reviewsato recordsjim james
9.0