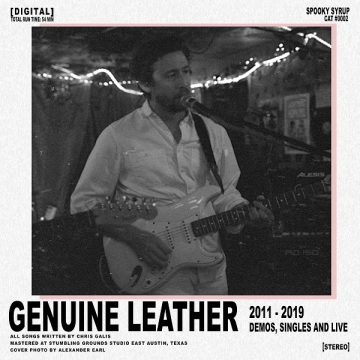 Once listeners got hooked on songs like The Kinks’ “You Really Got Me” or The Who’s “Substitute”, it became obvious that what is called power pop, a phrase coined by The Who’s Pete Townsend, would be a permanent rock fixture, no matter how many people hate The Knack’s “My Sharona” or Cheap Trick.

Texan Chris Galis and his ongoing project Genuine Leather are certainly in the lovers camp, and for good reason too. After three LPs, some EPs, and some singles, they have decided to try to collect their musical thoughts in a humbly named collection called 2011 -2019 Singles, Demos and Live. Frankly, nothing to be humble about here as vocal harmonies and guitar riffs, and nor should there be. Reminiscent of a number of huge power pop staples, Sloan being first in line, Genuine Leather musically does all the genre-lovers proud, because years of going at it have given them the chops to come up with some good sounds, something you can hear and feel right from “Feel It”, the opening track here.

On the other hand, Galis and co. do throw in a bit of a dark twist lyrically, with tracks like “Electrocution Song” or the live “The Viper”, which is an interesting twist to the usual lyrical content connected with power pop.

Altogether, this set of reconstructed previous material makes you definitely search out other Genuine Leather releases.

Formerly a lot of things, including a journalist and a translator, currently a freelance writer living in The Netherlands.
RELATED ARTICLES
album reviewalbum reviewsindependent
10