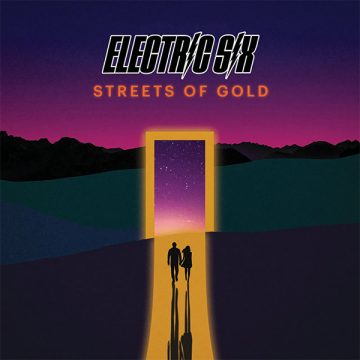 What have we here? An entire album of covers by Electric Six? Yes, and what a treat this is. Streets of Gold is Electric Six’s 15th studio album, and their first since 2018’s brilliant Bride Of The Devil. For Streets Of Gold the band put down their pens, picked up their instruments and creatively covered a number of bands. Founder and vocalist Dick Valentine continues to be joined by long standing members lead guitarist Johnny Na$hinal and  keyboardist Tait Nucleus?.  Newer members, rhythm guitarist Da Vé and bassist Rob Lower fill out the sound.

Opening with their take on “Don’t Change” (INXS), they instantly make it their own while maintaining everything great about the song This leads to the more obscure “Click Your Fingers Applauding The Play” (Rory Erickson), an excellent choice and one that they cover with ease. Again, they put their own spin on the classic and it fits nicely.

Some of their choices are very predictable, such as Alice Cooper’s “No More Mr. Nice Guy” and Kiss’s “Strutter”, while others come as a surprise. I don’t think anyone ever thought they would hear Electric Six take on “Yah Mo Be There” (originally by James Ingram and Michael McDonald) or Fleetwood Mac’s “Little Lies”. Both covers work and are a great deal of fun, and both give the band the chance to fully rock out.

Other covers are a little disappointing. Their take on The Jam’s “That’s Entertainment” loses a great deal with their handling of the song. Given the band and song they are covering, one would think it would have been much more energetic.  They also lose the wonderful melody of the original. Their take on Tin Machine’s “Under The God” misses the mark as well. It isn’t that it is bad, it just seems to lack the energy of the original and one would think this would be the perfect song for them to turn it into one of their own, as they do with “Slippery People” (Talking Heads).

As a bonus, Electric Six rerelease new versions of “Gay Bar” and “Danger! High Voltage”. While very good, they don’t add much to the originals and, in some ways, are unnecessary. But they are bonus tracks and it is interesting to hear new takes on the classics.

Overall, this is a great album, and an opportunity for Electric Six to acknowledge their musical heroes and heritage. That is never a bad thing. Some of their versions are extremely creative and outstanding. Most importantly, however, with Streets Of Gold, the band sounds like it is having a great time. It also allows one to get a glimpse into an alternative universe where 1970’s and 1980’s radio was dominated by Electric Six.

Born and raised in Whitby, Aaron discovered music through his love of The Beatles. This led to a career in radio, writing for various publications, and ultimately a radio show about The Beatles (Beatles Universe), which ran for over four years. When not immersed in music, Aaron enjoys spending time with the loves of his life -- his wife Andrea, and daughters Emily and Linda (all of whom have an intense love of music too).
RELATED ARTICLES
album reviewalbum reviewscleopatra records
9.0