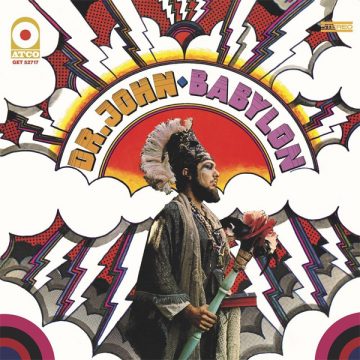 Dr. John
Babylon (Reissue)
Get On Down

Standing out as one of Dr. John’s most overtly political album, Babylon rings just as true as it did when it was first released in 1969, and it hasn’t lost any of its voodoo magic either. Originally cut in late ‘68, the album was influenced by dark themes such as the assassinations of Bobby Kennedy and Martin Luther King Jr., the Tet offensive, and the Vietnam War.

While the lyrics can be clumsy at times, there are moments that shine through with a weight it still holds to this day, as on the album’s title track “No politicians/No higher religions/To guide you from the dark.”

While the lyrics can be heavy, the music is weightless and the brand of Weird that Dr. John specialized in. Loaded with electronic effects and unthinkable, otherworldly rhythms, the remastering further draws out and amplifies Dr. John’s legendary New Orleans sound of voodoo-funk with the occasional jazz influence; a smoky and sexy groove with the sharp edge of something sinister. A darkness in the almost trance-like chant of Dr. John’s delivery.

What falls a bit short is the music itself. There are times where it fades a bit too much into the background, gives up a bit too much of its power to the lyrics. As a result, some of the mysticism is lost and it’s difficult to establish a connection from one song to the next. Even so, Babylon still carries enough magic to make goose bumps crawl across your skin when the rhythm slows on a song like “Twilight Zone” and the lyrics “In the outer limits of a land unknown/In the twilight zone,” mumbled like a spell.

The Spill Magazine is a Toronto-based online publication dedicated to covering the independent music scene with a strong focus on our thriving hometown talent. Our writers bring you up-to-date news, in-depth features on musicians and reviews for the latest CD releases. We also travel to the front lines for all local festivals including Canadian Music Week and North by Northeast.
RELATED ARTICLES
album reviewalbum reviewsget on down
7.0