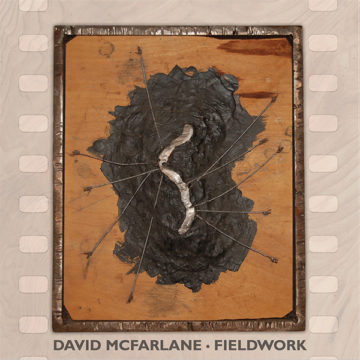 David McFarlane is an artist based in Toronto. Fieldwork is his second album and since his debut, The Wreck That You Are (2010), he has learned a great deal about himself and music. And it is all reflected in Fieldwork. McFarlane refers to this as alt-folk music, but to my ears it is more, much more. He writes incredible melodies, and tells stories about himself and others (“The Life And Death Of Tom Thomson”) but he also layers sounds and uses effects to join them.

For his second album, he has employed Brad Kilpatrick as a co-producer (and is on drums on the album) and the result is a finely tuned, tight, well-produced album, featuring eleven songs that all stand out, yet form a cohesive album. Listen to the transition from “As Usual” to “The Life And Death Of Tom Thomson”, or the lead into “Kemptville”. He uses sound unlike most folk artists and this is to his benefit. Then give “You Always” a spin, in which the use of noise at the end of the song says more than the actual lyrics. This album is extremely well put together. He benefits from having a co-producer

As far as lyrics are concerned, he is a brilliant lyricist. “Woke up today, at the usual time, In my usual frame of mind,” sings McFarlane in “As Usual”, and we all know there is more than meets the eye. He has a way of using few words and yet getting across a great deal of information or emotion. He is an artist in other aspects as well, but his ability to write lyrics is one of the strengths of the album. Whether he is writing about himself or an historic figure, he is able to articulate himself in a very honest and unique manner.

This is a great album. Eight years between releases is too long, especially with an artist as talented as McFarlane.

Born and raised in Whitby, Aaron discovered music through his love of The Beatles. This led to a career in radio, writing for various publications, and ultimately a radio show about The Beatles (Beatles Universe), which ran for over four years. When not immersed in music, Aaron enjoys spending time with the loves of his life -- his wife Andrea, and daughters Emily and Linda (all of whom have an intense love of music too).
RELATED ARTICLES
album reviewalbum reviewsdavid mcfarlane
7.0