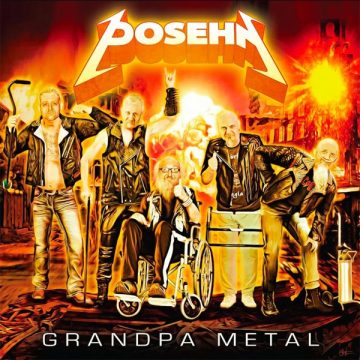 Heavy Metal as a genre has often shown that it has a sense of humour. Anyone with a passing knowledge of Spinal Tap or The Decline of Western Civilization Part II: The Metal Years will know that the genre often does not take itself too seriously. Therefore, established comedian Brian Posehn is not out of the norm in creating some hard-hitting and musically fun, don’t-take-me-seriously metal himself.

That is not to imply that Posehn doesn’t have a fine lineup to call upon. His band includes a veritable who’s who of metal, with an album packed with cameos from legends in the metal world including Scott Ian (Anthrax), Joe Trohman (Fall Out Boy), Brendon Small (Dethklok), Corey Taylor (Slipknot), Michael Starr (Steel Panther), Johan Hegg (Amon Amarth), Gary Holt (Slayer), Kim Thayil (Soundgarden) among others.

The songs themselves were co-written by Anthrax’s Scott Ian and Fall Out Boy’s Joe Trohman and they rock their way through homage to male sexuality, the Devil, and Viking rock. There is really no corner of heavy metal that is not parodied, but it is not parody alone as the music is tight, the riffs strong and the drumming mean. There is an ace lift of the ‘80s pop “Take on Me” and “What Does The Fox Say” and the remix of these tracks is genuinely inventive. In the case of these two covers there is less of the parody, more of a straight take of them as hard rockers, they get the rock treatment.

The key thing is that Posehn loves heavy metal music. Has been involved with the rock scene for years and so he never mocks the genre, it is a celebration of it. Essentially, if you love metal music and like to play it loud there will be something here for you. The album won’t be changing music, it might not be considered a classic, but it does what it does very well indeed.

The Spill Magazine is a Toronto-based online publication dedicated to covering the independent music scene with a strong focus on our thriving hometown talent. Our writers bring you up-to-date news, in-depth features on musicians and reviews for the latest CD releases. We also travel to the front lines for all local festivals including Canadian Music Week and North by Northeast. Don’t forget to check out our Facebook and Twitter pages for all daily Spill updates.
RELATED ARTICLES
a-haalbum reviewalbum reviews

by Contributing Writer on March 13, 2020
THE YETI HAD IT COMING A CONVERSATION WITH BRIAN POSEHN Heavy metal as a genre has a long history of being able to laugh at itself. Anyone with a passing [...]