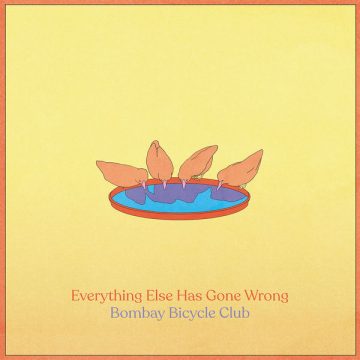 Bombay Bicycle Club
Everything Else Has Gone Wrong
Arts & Crafts

Bombay Bicycle Club have released their eagerly anticipated fifth album; Everything Else Has Gone Wrong.

“Everything Else Has Gone Wrong”, also the title of the last track of the album, is a song about hope, renewal, and finding safety in what brings you comfort and in what you love the most, while everything around you is crumbling. “Keep the stereo on/ everything else has gone wrong,” the chorus declares.

“Is It Real”, the second track off the album is an intergalactic bop with elements of ‘80s synths and indie rock. If you close your eyes and listen to this song, you’ll feel as though you’re exploring a new city, like Paris for example. It gives off a warm feel; those moments where you catch the sun peeking out at the right time, colouring the sky a cotton candy hue. The drums are heavy and the bursting synths at the end send the song home in a euphoric mood.

“Good Day’ is a very pensive, vocal-heavy song with a thoughtful meaning behind its light melody. “First my looks and now my friends?Day by day I’m losing them” can resonate with a lot of people as they age and of course, grow apart from people they were once close with. This track portrays the desperation for happiness while looking at exterior sources for joy job. “I just wanna have a good day,/But it’s only me that’s standing in my way” gives listeners a sense of the heaviness and sadness in the lyrics, portraying the realization that in the end, its only you standing in your way.

“Racing Stripes” speaks to the future, and to what they have achieved together, and will go on to make.  As the title has it, Everything Else Has Gone Wrong. The ‘else’ is crucial.

Fans and new listeners alike will be pleased with Everything Else Has Gone Wrong”. Bombay Bicycle Club have found their second wind and are coming back stronger than ever.

After borrowing her parents’ 35mm Yashica film camera and never returning it, Kristen discovered her love for photographing artists, particularly live performances. She spends her free time playing with her golden retriever and buying too many plants that she doesn’t have room for.
RELATED ARTICLES
album reviewalbum reviewsarts & crafts
8.0