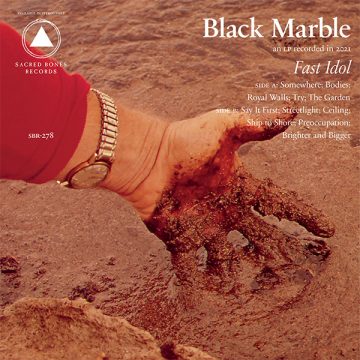 Black Marble has grown sonically on their new album. Whereas in the past, listeners came to expect lo-fi bedroom Synth Pop hits, Fast Idol is changing those expectations, one smash hit at a time.

The album starts off with the quiet/ loud / quiet “Somewhere” that begins with its beautiful and dreamy arrangements, then switches gears to a full-on dance number. With pounding drums and synths, the song harkens back to the ‘80s while the production is very now. “Bodies” is a mid-tempo number that sounds live Soviet meets Depeche Mode. It is such a refreshing step forward musically and a dream to hear all of Chris Stewart’s vocals this clearly.

“Say It First” is a throwback to earlier Black Marble songs, yet because of the production again sounds that much fresher. “Street Light” is a full-on Kraut Rock number that is equal parts dance and pop while being melancholy. This is the major appeal of the album. It can be all things at once, which not many albums can be.

“Ceiling” is possibly the best possible single off the album as it mixes ‘80s synths again,  but now with harmonies. Sounding like a modern XTC, Black Marble takes a huge step forward to uplifting the old bedroom Pop to a respectable level of songcraft where songs can stand on their own.

Black Marble should be classified as a big-league indie rock artist, even though I am not sure that is the goal.

Ex-pat living in Geneva, Switzerland from the hard streets of Baltimore, Maryland. Ex-radio-monkey and avid listener of all things that are supposed to be cool.
RELATED ARTICLES
album reviewalbum reviewssacred bones
8.0