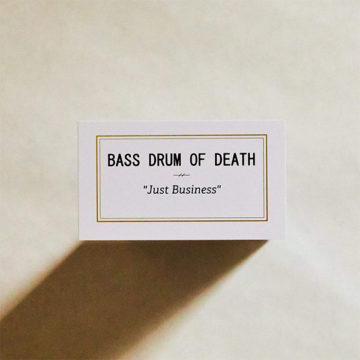 In 2011, a one-man-band from Oxford, Mississippi dropped its debut LP on Fat Possum Records. Over the next few years, Bass Drum of Death led by John Barrett released a slew of lo-fi goodness that looked to rival fellow garage rockers Ty Segall and Thee Oh Sees. However, after 2014’s Rip This, the project seemed to fall into silence. Now, after a four-year hiatus, Bass Drum of Death returns to the scene with a game changing record.

“It’s definitely more of a New York record than a Mississippi record,” John Barrett, mastermind behind Bass Drum of Death said prior to the albums’ release. Barrett who has been living in the Big Apple for the last few years seems to be moving forward. From the opening track “Third Coast Dreaming”, we can hear that there is a completely different vibe than his previous three LPs.

Despite this being a very New York record, the album’s first single, “Heavy”, a gospel-like number that must ring close to his southern roots. is a track that would have seemed oddly out of place on something like GB City, however it fits in perfectly here. Call it maturity, but Barrett knocks one out of the park with this one sounding like a Reverend Marc Bolan. With tracks like this and “Odds Are Good”, also reminiscent of T. Rex, we can hear that Barrett is quite a talented vocalist, which was often overshadowed in the past by various effects and the overall volume of the music. On Just Business, the vocals seem to be a more prominent focus in the final mix.

“You can actually hear what I’m singing,” Barret said in the albums media promotion. “I listened to it the other night, at 3 am, smoking a cigarette and I was just smiling. It made me feel like music is the only thing in the world I feel like I’m excellent at.”

With that being said, songs like “Falling Up” as well as the title track, retain the edge of BDOD’s previous records, with the former soaking every bit of garage rockin’ goodness and drippy surf reverb.

Having spent the last few years collaborating with UK band Royal Blood, the British influence seems to seep through on several tracks, specifically “I Love You (I Think)”, which is quite reminiscent of Jesus and Mary Chain.

With the release of Just Business, Barrett shows us that Bass Drum of Death is more than a garage-punk one trick pony. There’s clearly more to the band than that. While BDOD still keeps its edge, its certain than that Barret is not afraid to experiment with power pop, glam and even gospel.

As a child growing up in the suburbs, Ryan found music as a way to soothe his boredom. After first hearing AC/DC at the age of 10, he was hooked on music. Tracing its roots to the ‘50s, he became obsessed with Elvis, Buddy Holly and Chuck Berry. Somehow that led to grunge, then psych-rock, then jazz, etc. The list goes on and on and his collection of vinyl records continues to grow.
RELATED ARTICLES
album reviewalbum reviewsbass drum of death
8.0