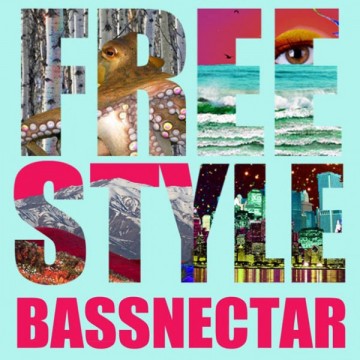 Freestyle, the name dropped on Bassnectar’s new EP which couldn’t suit it better. It’s in your face and jumps around, so hold back on the expectations, other than it’s awesome. From track-to-track there isn’t much of a blend or overlap, but who’s to say that’s not a good thing? Freestyle leaves you wanting more and eager to hear the next track. The variety of sounds and elements; extreme bass, Rap/Hip-Hop, vocals, House, drums, keyboard, sequencers and synthesizers and Dubstep are just so mesmerizing and come through with full of strength in every song.

Bassnectar is one hell of a DJ and producer. “Ego Killer” and “Breathless” are the tracks you’re going to remember most if not “Freestyle.” Freestyle couldn’t have been formatted and constructed any better than it is; at no point will you want to skip to the next track or get bored. They hit you hard and make you wish this six-track album were longer. Half-an-hour of this robotic rage album only begins to describe Bassnectar’s talent. His ‘bass heads’ (fans) will definitely value this album as highly as the rest of his releases.

The Spill Magazine is a Toronto-based online publication dedicated to covering the independent music scene with a strong focus on our thriving hometown talent. Our writers bring you up-to-date news, in-depth features on musicians and reviews for the latest CD releases. We also travel to the front lines for all local festivals including Canadian Music Week and North by Northeast. Don’t forget to check out our Facebook and Twitter pages for all daily Spill updates.
RELATED ARTICLES
album reviewsbassnectar
9.0