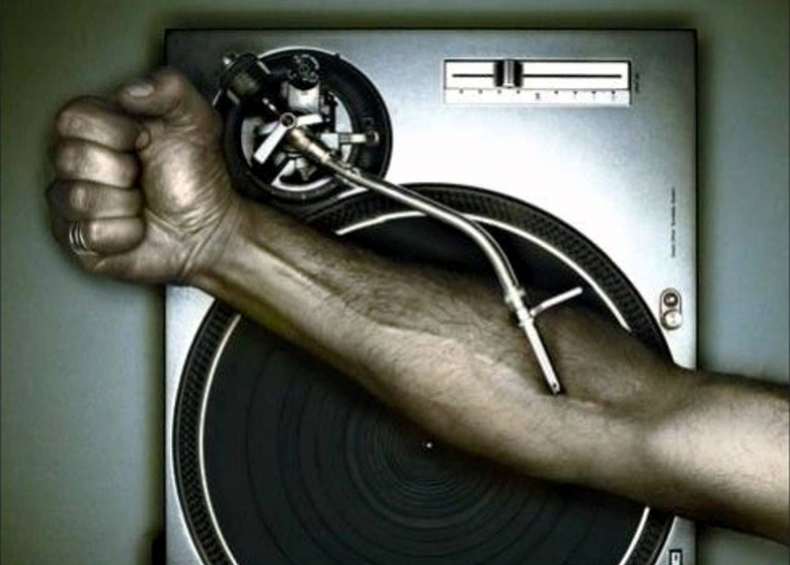 We arrive at the empty club early in the evening, drag five hundred-plus pounds of awkwardly shaped gear and twisted cables onto a sticky stage and start piecing the puzzle together. After sound check, if the bar is open, the first drink of the night helps take the edge off. If we’re lucky we’ll have time to scarf down some food, set up the merch table, change clothes and hobnob (and drink some more) until our set. All the while the energy builds, the fuse is lit and sulfur fills the air.

The club is now packed and sweaty, it’s midnight and three bands later. We take the stage and give it all we’ve got. Sometimes I almost pass out while performing due to the sheer intensity and lack of sufficient oxygen processing… I have seen the tunnel closing more than once. It hurts, but it’s worth it. Maybe that’s part of the attraction. The crowd begins to chant: “One more song, one more song…” And you know what? It’s music to our ears. It means one more song before we have to pack up and drag all that shit back out to the car again.

Artists have baggage, but what kind of an empty-shell of a human being doesn’t? There aren’t many reasons one chooses to get up in front of 100 or more strangers and bare their souls to them. It’s something we are born with, something that can’t be caged. Some bring their demons to light; others choose not to air out their dirty laundry in public. But all artists worth paying attention to have one thing in common: They are all in pain.

The full beauty and satisfaction of being a musician lies not only in the performance, though that is its zenith. Every moment connected to the band is a new brushstroke, or at least the gesso on the canvas. Every gig gained, every lesson learned, every time you get ripped off, every new fan that becomes a friend, they are all part of the art; along with those in-between jobs that keep us really, really busy. The jams, the rehearsals, the constant social media upkeep, not to mention the parties, can be maddening. The truth is we really just want to share our art, but no song is ever perfect, no performance is tight enough; it’s never, ever enough to satisfy the creator.

So we drink. We smoke. We do drugs. We fuck. We keep the mind and body occupied. We try to look out for each other. There is no shortage of distractions, and the more help an artist gets the easier it is to be distracted. The saddest individuals I have met are the ones who have tasted a good chunk of fame and lost it; the ones that are sniffing their self-confidence off of a dirty toilet seat. Smells like shit to me.

Mark Sandman was an innovator, a poet and a soft-hearted adulterer. He died on stage at 40 years old, in full public denial that he had a drug “problem.” Heart attack – bang, dead. I suppose he saw the drugs as the solution. I love drugs. I can’t do the vast majority of them without winding up in the ER, and that is nature’s gift to me. It’s my all-natural life-extending device, implanted in my brain by someone who wants me to stay alive. Had I been the type of free-minded spirit that can explore narcotics without trepidation, I would almost definitely be jamming in the 27 Club by now.

But I’m still here, and that’s the point. I’m not planning on leaving any time soon. I’ve had my extreme experiences, ethereal and mind-altering, living nightmares and euphoric fantasies. So now I’m looking for a new drug. We all are, always. Each one I find lets me down. I believe that’s why we have such a negative association with the word “drug.” They always let you down, invariably and eventually. I don’t think I’m going to die from this, because my drugs are changing. My drugs are becoming more subtle and accepted.

Coffee, alcohol, porn, and adrenaline are all totally acceptable forms of self-medication. But any of those can become dangerous to our precious little lives if abused. The problem is there is no way to mediate or measure. We are so damn unique and, by God, that makes me want to celebrate. So here’s a toast: To the dead and to the living. To the dreamers and the explorers. To those who live without regard for what others think. To the excess, to the wild trips, to the overdoses and the ones that just won’t die. And, what the hell, to those who just don’t seem to give a shit. Keep going. Life is an adventure. Here’s to drugs.