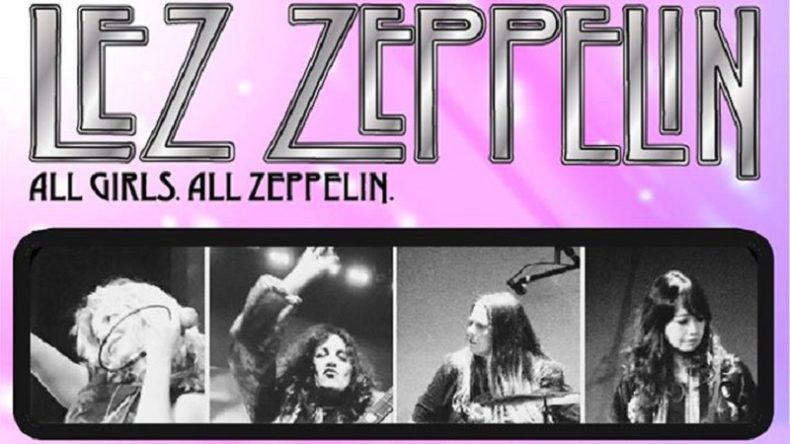 ALL GIRL – ALL ZEPPELIN

New York girl rockers Lez Zeppelin – the all-girl band earning the reputation as one of the most exciting live acts on the scene – are bringing their version of the rock-laden classics penned by the legendary Led Zeppelin to Australia for the first time, and audiences better get ready for a blistering live show. Lez Zeppelin – aptly coined as all girl, all Zeppelin – have been paying homage to the British greats for 14 years and they’ve earned acclaim around the world for doing it. This is not your ordinary tribute band, Lez Zeppelin embody the spirit of their namesake, playing the iconic songs note-for-note, while incorporating their own musicality. These girls are all consummate musicians, they know their craft and they know it well… and they rock hard.

It was only a few years ago that Jimmy Page attended one of their shows in London and gave them his endorsement, impressed by the band’s energy and passion, as well as their ‘superb musicianship’. It is no surprise then that audiences far and wide are embracing the band. They’ve been featured on the likes of BBC, CNN, ABC, CBS, FOX and MTV. They’ve featured on numerous festival bills, including Hellfest (France), Rockstock (Canada), Concert for Mumbai (India), Beerfest Asia, Download (UK) and Rock On The Range, to name a few. They have a rigorous tour schedule, having performed in all major cities in all 50 USA states, as well as Japan, Singapore, Germany, Switzerland, Italy, Belgium and Poland, among others. They’ve also played the coveted Madison Square Gardens – twice!
The all-girl quartet, led by New York guitarist Steph Paynes are looking forward to their first sojourn to Australia with their upcoming tour. “We are over the rainbow about it [the tour], or perhaps should we say, atop the Stairway to Heaven,” says Steph. “We have heard many rumors that some of the greatest rock fans in the world live in the Land Down Under. So, we thought it’s about time we hopped on over to see for ourselves.”

Harking back to the beginning, Steph formed the band on an idea she had one afternoon, while between gigs. Already an established musician within her own right, she had been performing with the likes of Ronnie Spector. “I suddenly had this thought, ‘wouldn’t it be ridiculously awesome to play the music of Led Zeppelin with a bunch of kickass women and completely indulge my ‘Guitar Goddess’ fantasy’,” she says. “Now, if I had been a more reasonable person, I would have had a laugh and left it at that. But, instead I thought ‘why not!’. All I needed were three other worthy, willing and equally insane girls with killer chops. Clearly an impossible quest!”

As they say, from each crazy idea, is born a brilliant concept – and it was certainly the case as Steph found the three musicians to join her in the quest for Lez Zeppelin. From the beginning, Lez Zeppelin was to always be a ‘she-incarnation’ not an impersonation. “It was clear to all of us from the onset that what made Led Zeppelin so magical, iconic and timeless was the indefinable chemistry between the four powerful and charismatic musicians,” Steph says. “When they played live, it was all about communication and dynamics – this is what ignites an audience and creates such an intense concert experience. That is what we strive to do. When we step onto the stage, we are completely committed to that musical moment and we give it everything we’ve got. We never really know what is going to happen from one moment to the next – this is exciting for us and it turns on the audience as well.”

It is this spontaneity that Lez Zeppelin bring to every gig. With a plethora of iconic songs at their disposal, no show is ever the same. “We like to put together our setlist right before each show, so that we can argue over which songs to include and throw plates across the room at each other,” says Steph. “We do really love to mix it up. “There are no real rules as far as setlists go, but some songs are almost impossible to omit without causing a riot – “Rock and Roll”, “Black Dog”, “Whole Lotta Love”, “Kashmir”… and of course, the ubiquitous “Stairway to Heaven”. We also love to dive into the deeper cuts such as “Hots On For Nowhere”, “For Your Life”, “How Many More Times”. We could go on and on – they are all great.”

SPILL NEWS strives to keep our readers up to date with news and events in the music industry. We keep you informed of the most recent information regarding new releases, tour dates, and information items about your favourite artists.
RELATED ARTICLES
jimmy pagenews

by SPILL NEWS on June 23, 2018
THE SONG REMAINS THE SAME SOUNDTRACK TO BE REISSUED WITH NEW REMASTERING SUPERVISION BY JIMMY PAGE SUPER DELUXE BOXED SET, CD, VINYL, AND DIGITAL VERSIONS, PLUS THE FULL ALBUM’S DEBUT RELEASE IN HI-RES 5.1 SURROUND [...]