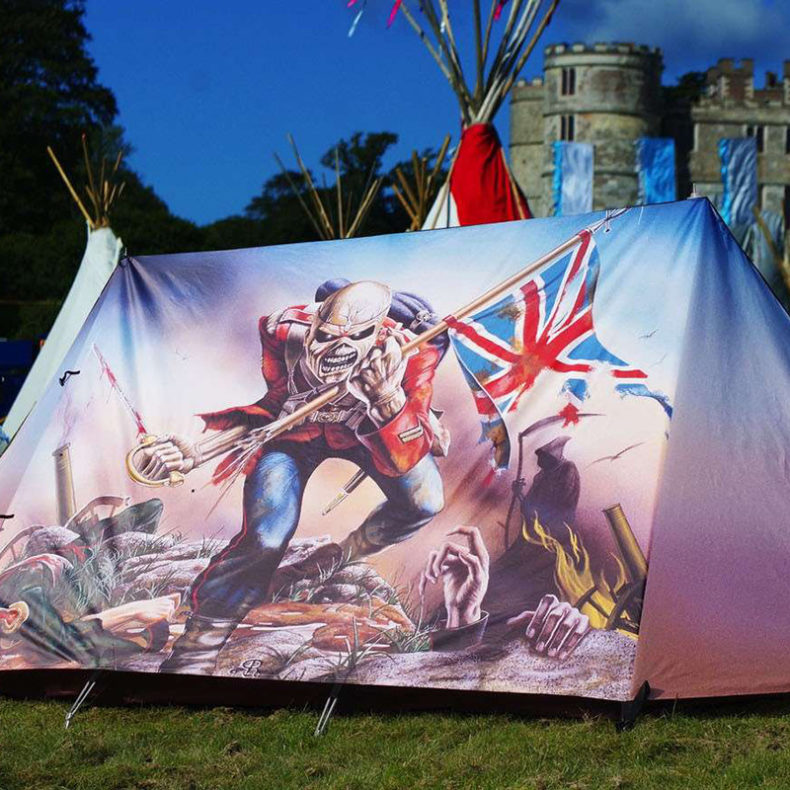 Featuring the iconic cover art from Iron Maiden’s 1983 single “The Trooper”, the Original Explorer tent will make you want to rock out whether you are in your back garden, following the band on tour, or attending one of the hundreds of rock music festivals across Europe this summer.

English heavy metal band Iron Maiden formed in 1975. They are known for being the ‘New Wave of British Heavy Metal’ due to hits like Phantom of the Opera, Hallowed be Thy Name, The Trooper and Powerslave. The band’s prolific discography includes sixteen studio albums, twelve live albums, forty-three singles, four EPS and seven compilation albums. Their sixteenth studio album, The Book of Souls, was released on the 4th September 2015.

In 2018 the band embarked on their ‘Legacy of the Beast’ World Tour consisting of 38 European dates and set to extend into 2019 with international dates. What better way to camp at one of the 10 festivals on the tour than in an officially licensed Iron Maiden tent.

FieldCandy’s Original Explorer two person tent is not just a ‘pretty face’, this 4 season tent is 100% waterproof and has been made to withstand the most extreme conditions, including the rock and roll conditions of an Iron Maiden concert or metal festival.

The Original Explorer Tent and carry case have been designed with the sixth member of the band as the feature meaning that ‘Eddie the Head’ is always with you.

All FieldCandy products are extremely high quality, with specially developed printing technology to produce designs that are UV fade resistant, and fire retardant. Each product is made in England to the high specification of an expedition tent.

The Original Explorer Tent is available to buy online at FieldCandy or via the official Iron Maiden web-shop.

SPILL NEWS strives to keep our readers up to date with news and events in the music industry. We keep you informed of the most recent information regarding new releases, tour dates, and information items about your favourite artists.
RELATED ARTICLES
bruce dickinsoniron maidennews
10

by Josh Whitworth on June 29, 2018
Bruce Dickinson Scream For Me Sarajevo: Music From The Motion Picture Sanctuary Records Not only is this album just a great hard rock album, but [...]
7.0