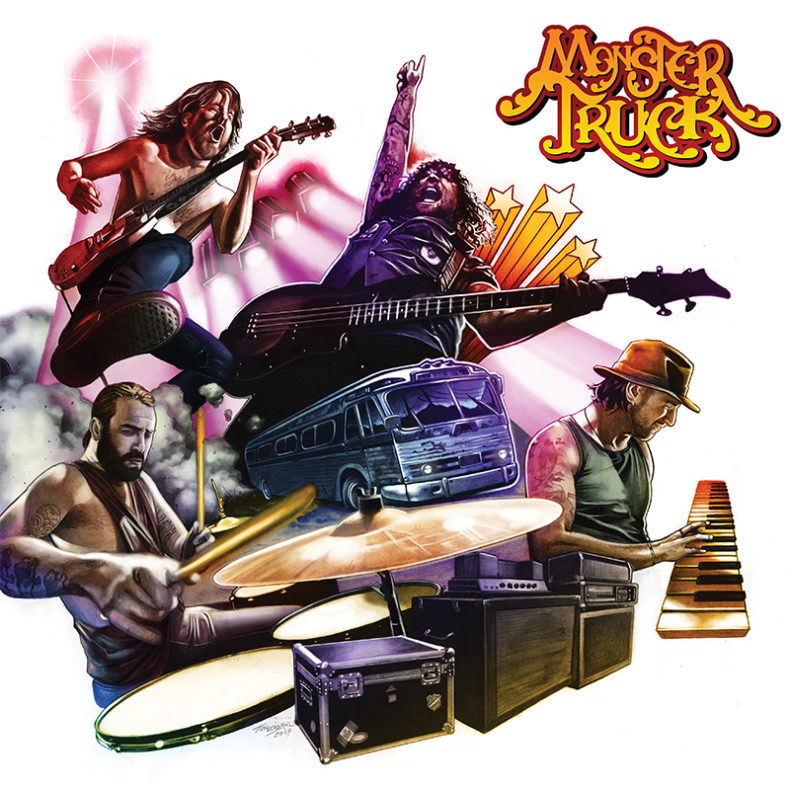 Monster Truck return with their brand-new studio album True Rockers, which will be released on Mascot Records/Mascot Label Group on September 14th.  It’s been two years since the mighty ‘Sittin’ Heavy’ came out and in the 18 months that followed its release, they played over 150 shows, which included arena tours with Nickelback, Billy Talent and for the final ever European Deep Purple tour.  They also shared the stage with Black Stone Cherry, Volbeat, The Temperance Movement, Jane’s Addiction, Rob Zombie and Alter Bridge.  The band embarked on their biggest European headline tour to date selling out venues across the continent and thundered through mainstage festival slots at RockPalast (Germany), Ramblin’ Man Fair (UK), Download (UK), Rock on the Range (US), Shiprocked (US) and Rock in Vienna (Austria) amongst others.

During the time on the road the band took a recording rig on tour and songs came together for what was to become True Rockers. They began to send material back and forth to producer Dan Weller (SiKth, Young Guns, Enter Shikari). “When the inspiration strikes, use it, if you’re not gonna use it, you’re wasting it” says frontman/bassist Jon ‘Marv’ Harvey, “as soon as you think of something could be a good song, work on it, immediately. Inspiration is so valuable.” They then returned to Echo Mountain Studios in Asheville, North Carolina in July, 2017 to record the album.

True Rockers is the sound of a band letting lose and having fun. Harvey affirms, “We want people to listen to it and have fun, have as much fun as possible.” “Yeah, that’s what I was gonna say too,” adds guitarist Jeremy Widerman. “I mean right off the beginning of the album you hear me scream at Marv. That just kicks off the entire vibe of the album. Us in a room, having fun, joking and yelling at each other.”

Album opener “True Rocker” is a statement of intent and features Mr ‘I Wanna Rock’ himself, Dee Snider (Twisted Sister). “He’s a true rocker, who’s more perfect than Dee Snider” says Harvey.   ‘Thundertruck’ is another juggernaut and was originally from the ‘Sittin’ Heavy’ sessions but was abandoned. Widerman says. “We had worked on that with me playing that lead part, and it left a big gaping hole in the heaviness of the song. Once we shifted that line over to the organ, we were like, this is awesome.”  ‘Devil Don’t Care’ oozes blues-rock swagger and tackles the notion of people staunchly rooted in religion and  they explore real depth in the emotional ‘Undone’ which was written about people that struggle with addiction and the feeling of hopelessness, while album closer ‘The Howling’ poses the question, are spirits real? 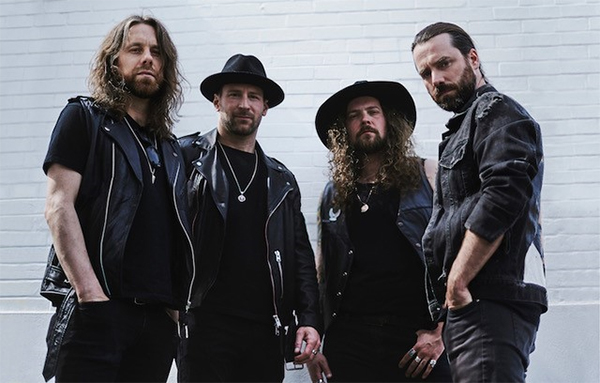 The album had been put to bed but the band were still bouncing around ideas and they had the opportunity to work with award winning producers Gavin Brown and Maia Davies on songs ‘Evolution’, Young City Hearts’ and ‘Hurricane’. “We had a chance to work with some hit makers so we took the chance, and what came out is different than anything we have done. Gavin and Maia were fantastic to work with. It added a lot of color to the record and allowed us the opportunity to take a risk and branch out a little,” explains Harvey.

Elaborating further Widerman adds, “It almost wouldn’t be a Monster Truck record if we didn’t reach the supposed end of the process and then double-back to track a few extra songs in order to strengthen what was already a strong record to us.

Harvey has become a father since the last record was released and this life changing moment had a real effect on the song writing. In 2019 they will celebrate their 10th Anniversary and for a band that wasn’t going to take things seriously, they have already achieved an incredible amount in that time. “I think you have to know where you came from, otherwise how do you know where you’re going.” Harvey says. “You can’t forget your roots, we started from such a pure place of just a party. I literally couldn’t ask for anything better. How am I so lucky that I get to do this, perseverance pays off.”

This is the essence that is pumping through True Rockers, a band that formed only for fun back in 2009 have toured the world because they connect with their fans who want that from them. Upon the release of True Rockers they will be three albums in and are steamrolling through the world picking up people along the way that want that wild ride and its feels like they are only just getting started.  Widerman adds, “Looking back to the beginning I think in a way, I knew it, I really did. Within the first couple of rehearsals we ever did. I always think back to how I knew this was something different to anything else I’d ever done. It was weird because I had to manage how excited I was, we all agreed that this wasn’t gonna be a band that signs a record deal and goes on tour. I was like, holy shit, this is better than anything I’ve ever done before. How am I going to convince these guys to go with it?”

Don’t tell Monster Truck that Rock is dead. Rock isn’t dead, it’s alive and burning a trail across the globe. Don’t fuck with the Truck.

SPILL NEWS strives to keep our readers up to date with news and events in the music industry. We keep you informed of the most recent information regarding new releases, tour dates, and information items about your favourite artists.
RELATED ARTICLES
dine alone recordsevolutionmascot records