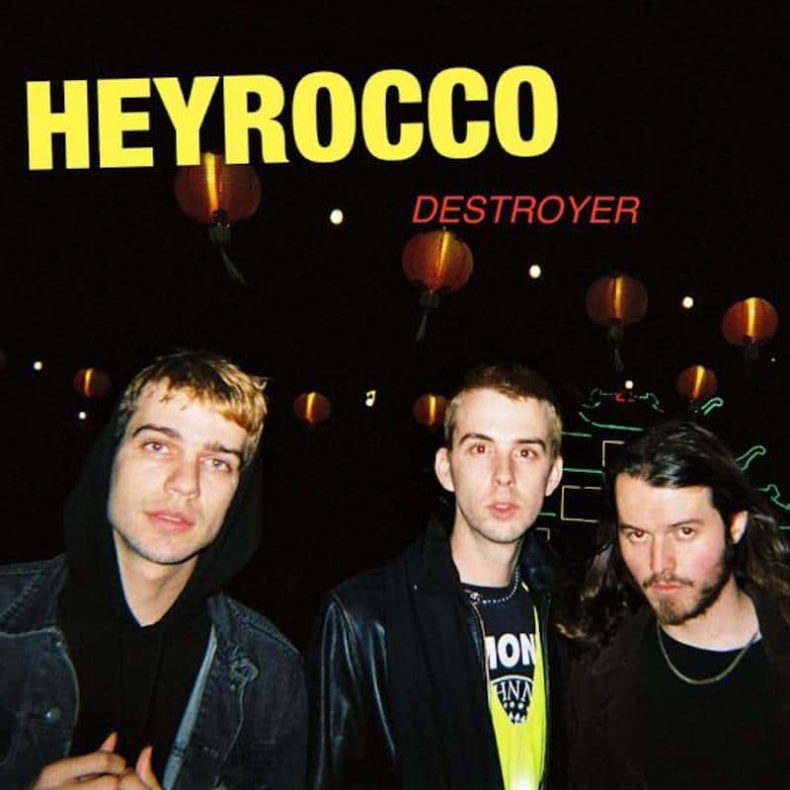 Now, in 2019, the band are looking back on a bizarre and turbulent three year time period which included stolen guitars, sleeping in their cars, getting arrested for skateboarding in Walmart and the sad passing of their dear friend, Pete, who they were living with in LA at the time. All of these instances have come to shape the Heyrocco that we see today.

“Destroyer” comes as the first massive new single from the band. With its matured and modern take on 90s grunge “Destroyer” propels Heyrocco back onto the scene with a bigger point to prove than ever before.

After Teenage Movie Soundtrack came out, we did some touring and knew it was time we dig deeper. We’d been in Los Angeles a few times and ended up living with an older guy named Pete G, an enthusiast for art and smoking inside restaurants. He let us live in his 80% finished dream 3 story home in Venice for a few months. Pete sparked something in us and our music we will never shake. We were living… i mean LIVING each day like tomorrow didn’t matter….taking in as much music, film, skateboarding, latin culture, and whiskey as we could. Whiskey was Pete’s drink of choice. We eventually left brother Pete to chase the dream touring the country with the plan to return to Venice within the year. Unfortunately, he didn’t make it until the end of the year. His drinking got the best of him and we had to say goodbye to our dear friend and our dream of California – for a while. We weren’t left empty handed though, we took what recordings we had to Nashville- couch surfed, mixed, and tweaked what became ‘Waiting On Cool’. Which was exactly how we felt at the time, just waiting, to find our place.. Always taking the long way around.

Nashville couldn’t last forever and after having our guitars stolen one night, we opted to drive home. This put us back in Charleston at The Cool Family’s house, where we got a humble restart. His parents had just thrown the house on the market to play music on cruise ships full time but left us the keys for six months. We then turned it into a full blown summer studio pad (with a pool!) This time period is probably when the band accomplished the most and least at the same time, if that makes sense. We discovered what not to be. We recorded with local friends, played as loud and fast as possible, but still something was missing. Our story had to continue somewhere else. And no matter how ridiculous and bizarre we acted in front of the realtors, the house still sold. It was time to move on. Somewhere in this time period we landed a gig at a local Cuban bar & grill under the moniker Los Rocco’s Cuban Family Band. A five piece band singing only cuban standards in broken spanish. We were as unauthentic as the food they served. This bought us just enough time to save up and get on before the proverbial shit hit the fan in Charleston. The ceilings were low, our West Ashley studio had fallen through, and we opted to head west. We figured we’d try to find a place as close to the one studio we did know in Los Angeles. John Would’s. John’s the kind of guy you can be yourself in front of yet he challenges you at the same time. He’s just a big kook though really..  we ended up making something that truly represents the last three years for the band.

by Ljubinko Zivkovic on January 31, 2020
Destroyer Have We Met Merge Records Since the release of Streethawk: Seduction in 2001, Dan Bejar has been coming up with one great album after another. Destroyer’s Rubies from 2006 Poison [...]
8.0