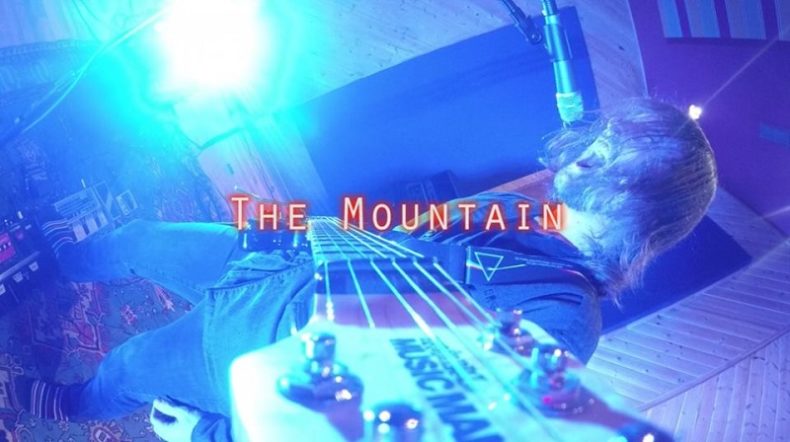 “The Mountain has a special place with me, and is one of the songs that helped push me to write heavier rock music during a transitional music period between singer/songwriter folk music, and the kind of music I write now. In fact, I performed this piece with an acoustic guitar for more than a year before it reached its current iteration.

I wrote this song after having not written an original song for a long time, and was beginning to feel like I was out of practice. I wasn’t writing as much because life was getting busier, and that was getting to me. Sometimes when we put something off for too long, maybe going to the gym, or working on that book you’re writing, what was once a simple routine task can become an insurmountable obstacle. Like an ant hill that’s grown to the size of a mountain. And so I literally wrote the song about writing songs again, using this mountain analogy to break the streak. “So I’m taking the first step today. Mind over matter, the mountain is mine.”

‘The first step up the mountain’:

The first time performing it was a particularly memorable experience. I’d written it three days before heading overseas for a month-long solo trip, where I’d soon be performing five times in Manchester. I had two weeks between leaving Toronto and my first UK show where I wouldn’t get to rehearse even once. I listened to a rough demo I made at home endlessly, imagining every note and the timing of every point I had to switch something on the loop station. ‘It would be so cool to premiere a new song overseas!’

I arrive at ‘The Whiskey Jar’, a local bar and hidden gem of an open mic in Manchester with around 70 people and a magical energy I haven’t quite felt at an open mic since. I had three songs to play, and was unsure of whether or not I wanted to go for it and play the new piece. In a split second decision, with the room’s energy frothing after the first two and a Facebook live stream sending the show back home, I decided to go for it. The energy was tremendous, and I played that song every other night I performed there. It’s become a staple song of mine and I’d be hard-pressed not to play it at a show; it still brings me back to the amazing energy of a small crowded room in Manchester. It’s about time a performance of the piece was recorded properly and I’m very happy with how this came out.

Dylan Hennessy is a Toronto-based solo artist whose obsession with a broad range of music has lead him to a destination he describes as a “one-piece progressive rock band”. As a graduate of Seneca College’s “Independent Music Production” program, he is a versatile musician, spanning an array of instruments in a variety of genres, with his show centering around original looping arrangements done a little heavier than you might expect.

This past year, Dylan’s looping abilities have taken him to some of Toronto’s most recognizable stages (Yonge-Dundas Square, MOD Club, The Phoenix, Horseshoe Tavern), countless independently organized showcases and festival performances, won him a flight to Israel, landed him a five show run in Manchester for Indie Week Europe, and have taken him all the way to the 2017 Indie Week Canada Finals.

Dylan incorporates a wide array of tones and effects, and as much influence from as many styles as he can into his own creations. He tries to “make a guitar and vocals sound like as many things as possible”. With elements of rock, folk, metal, electronic, and sometimes highly technical and unconventional guitar playing, Dylan is truly a one man power force. When not on stage, you can find Dylan working at Long & McQuade. He’s constantly gigging in clubs, busking downtown, and supporting his local music scene as much as he can. You can find frequently updated material on his Facebook and YouTube pages.