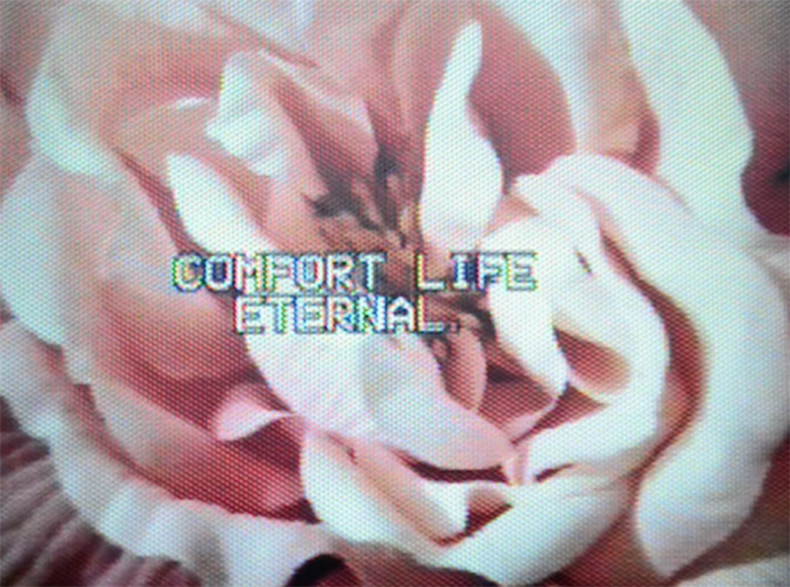 Blissing Room was founded by Dane Jarvie, band leader, composer and lead vocalist. The project was spawned out of the initial bedroom recordings of Jarvie, 24, in his Phoenix, Arizona home—originally as an alias for his forays into more synth and piano-based compositions. Armed with Ableton Live, a Juno keyboard, guitar, and Twin Reverb amp, he spent nearly a year crafting the backbone that would later become its first album, Comfort Life Eternal.

“The long process of writing this material was during a time when I was in an intentional period of relative isolation, not attending a lot of shows. I had just gotten back from my last tour with another group (Phoenix band, Emby Alexander), and I was increasingly disenchanted with the thought of making another rock LP,” said Jarvie.

“I made it a point to write music in a way that broke old habits I had relied on – the primary use of electric guitars, using traditional rock drum kits, with lots of guitar pedals, etc. I wanted to create songs with pop structures, but relied heavily on piano and synths as main base instruments.”

Jarvie was highly selective about the influences he was letting in during the writing process.

In early 2015, Jarvie enlisted the talents of Anthony Brant, Brian Whelihan, David Hjelmstad, and Nick Regal to craft the bedroom recordings into more polished songs that translated into the live band setting. After a few months of practice sessions, Blissing Room set out to record their debut LP, Comfort Life Eternal, with engineer Eli Crews (Tune-Yards, WHY?, Deer Hoof) at New and Improved Recording in Oakland, CA.

“Eli used almost all analogue gear on this record, and mixed it all on this massive Neve 5316 Custom Console from the 1970’s, giving it this huge warm sound,” said Jarvie. “He helped us achieve a lot of our sound design, and he was very patient with us. I’m very grateful that I had the opportunity to collaborate with him. He stressed the importance of getting raw takes, and helped me find beauty in vocal imperfections without getting hung up on them. I think he felt that those vulnerabilities welcomed the listener, and made the music more relatable.“

Jarvie spoke of the impulses that inspired the album name.

“The album title reminds me of growing up. Being a kid with so few years to compare against each other, that you are oblivious to the passage of time. The comfort of being years away from living inside a womb, with your entire life ahead of you. If you listen to the lyrics, a lot of them were written from the perspective of being an adolescent. I’ve always wanted to have them sound like they were slightly juvenile, like they were ripped from one of my old Xanga posts as a kid. Like they were taken from some kind of pre-Myspace blog, or something.”

Following the Oakland recording sessions, Blissing Room shot two music videos in a period of three months, with the first video accompanying the single, “Know You.”

“We shot a huge chunk (of “Know You”) in a house that was weeks away from being razed. Tenants were selling speed out of the kitchen the entire time we were filming. They were vocal in having us preserve the environment through video and photographs, and we tried our best to accommodate. One tenant was very precise in the arrangement and curation of found materials in the backyard, which all had a very specific place and order, albeit chaotic. All of the other locations we shot in had no set design or additional modifications, and I think that leant to the overall vibe of the shoot,” said Jarvie.

“The song means something new to me every time I listen to it. But when I wrote it, I wanted to capture the feeling I have when creating music, alone in my room. I wanted to convey the mania that grips me when I write a song, and the joy that overcomes me during my writing process. Without judgement of others.”

“This song is a testament to wearing my creative idiosyncrasies like a badge of honor. It’s about being free.”

Comfort Life Eternal is set to be released sometime during the summer of 2016.

Official music video for Blissing Room’s “Know You,” off of their debut album, Comfort Life Eternal. Directed by Freddie Paul.

“This video is about being free. It’s about how the creative urge always finds a way. It’s about personal agency and living by your own code. It’s about aligning yourself with like minded individuals who empower you, and blasting off with them. It’s about self-love, self-respect. All of these things.”